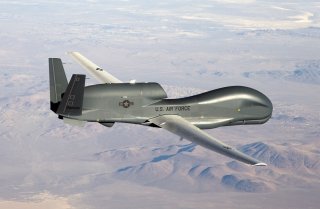 As the Chinese military has continued its show of force across the South China Sea and to the Straits of Taiwan in recent months – from sailing its aircraft carriers or launching jet fighters close to Taiwanese airspace – the U.S. Air Force has also continued to track those movements quite carefully using a mix of aircraft and increasingly the use of drones.

This week FoxNews reported that B-1B Lancer bombers have been flying out of Guam in support of Indo-Pacific Command, and have been specifically conducting missions over the South China Sea. In early May the B-1Bs were deployed to the region to conduct bomber task force operations out of Andersen Air Base, Guam. Four bombers and approximately 200 airmen from the Bomb Squadron, 7th Bomb Wing, Dyess Air Force Base, Texas, were deployed to support Pacific Air Forces' training efforts with allies, partners, and joint forces. The bombers have been conducting strategic deterrence missions to reinforce the rules-based international order in the Indo-Pacific region.

The Air Force also conducted a rotation of 319th Reconnaissance Wing Det. 1's RQ-4 Global Hawk surveillance drones to Yokota Air Base, Japan to ensure continuous operations in support of the Indo-Pacific Command's reconnaissance requirements. The high-altitude, long-endurance remotely piloted and unarmed drones were moved from Andersen Air Base to Yokota as the Japanese base was seen to provide a more stable location from which the unmanned aerial vehicle (UAV) platform can operate – notably inclement weather such as typhoons that could hinder their readiness.

"Having alternate locations to execute our mission during seasons of inclement weather ensures our ability to continue executing U.S. Indo-Pacific Command and the Alliance reconnaissance requirements in support of the defense of Japan and to maintain international peace and security in the region," explained Lt. Col Ben Craycraft, 319th Operations Group Det. 1 commander via a statement from the Indo-Pacific Command.

"I am extremely excited to return to Yokota Air Base and continue to build our partnership with this extremely capable base and its supportive community," added Craycraft. "As in 2019, Yokota Air Base continues to provide the most ideal location for our operations due to the Kanto Plain's favorable weather and our ability to conduct operations without causing impacts to Yokota's flight operations or the local communities surrounding the base."

The Air Force is flying the B-1B bombers and the Global Hawk drones in the South China Sea and other areas within the Pacific theater as part of a broad strategy to sustain surveillance in the region.

The Global Hawk's mission is to support a broad spectrum of U.S. intelligence, surveillance, and reconnaissance (ISR) collection capabilities; and to support joint combatant forces in worldwide peacetime, contingency and crisis operations. The drones can also be used for humanitarian assistance and disaster relief operations. The UAVs are designed to provide persistent, day and night, high-resolution, all-weather imagery of large geographic areas with an array of integrated sensors and cameras.

According to past reporting from The National Interest, the Air Force operates some 34 of the high-flying Global Hawks, and has announced plans to retire as many of 24 of those to replace them with a more advanced surveillance UAV platform – likely the stealthier RQ-180. In the meantime, the RQ-4 Global Hawk has been regularly rotated to Yokota Air Base.

"Yokota Air Base continues to demonstrate it is one of the most effective and capable bases to safely receive aircraft and personnel during annual rotations or during a crisis or contingency," explained Col. Otis Jones, 374th Airlift Wing commander. "Whether it's an unseen enemy like the coronavirus or more visible threats like typhoons, Team Yokota is ready to ensure our partners and allies can continue their mission from a reliable airfield."