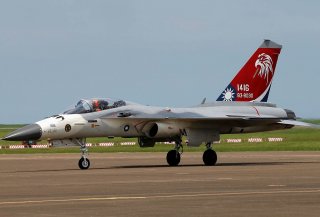 Tensions are rising again between China and Taiwan after Chinese fighter aircraft briefly entered Taiwan’s airspace on Tuesday. The Taiwanese Defense Ministry reportedly broadcast warnings and “took active response to dispel” multiple Chinese Su-30 fighters that flew near the southwest of the island, while Taiwan also responded by scrambling its own aircraft.

“The military is fully monitoring sea and air conditions around the Taiwan Strait and takes active responsive measures to defend our territorial safety,” the Defense Ministry said in a statement, as reported by AFP.

The incursion followed Taipei’s announcement for its annual “Han Kuang” live-fire military drill, which will be held next month. The event will include computer simulations as well as an exercise to defend the island nation against an opposing invasion force.

Beijing has claimed Taiwan as part of its territory since the Communist forces’ victory at the end of the Chinese Civil War in 1949, and has vowed to one day reunite the island with the mainland—including by force if necessary.

Chinese saber rattling has increased—including ramped up fighter flights and warship crossings near the Taiwan Strait—since the election of Taiwan’s President Tsai Ing-wen in 2016. She has refused to acknowledge that the island nation is a part of “one China.”

After she won a landslide re-election in January, Beijing has become more aggressive and this included a Chinese military jet briefly crossing the median line of the Taiwan Strait in February, and act Tsai reportedly called “meaningless and unnecessary.”

Even before the election, Beijing had been displaying its intentions, such as when it sent its first domestically-built aircraft carrier Shandong through the Taiwanese strait in December. While that carrier has still been conducting sea trials, in April the Chinese People’s Liberation Army Navy (PLAN) carrier Liaoning was seen to operate with impunity as the only aircraft carrier in the Western Pacific when the U.S. Navy’s USS Theodore Roosevelt (CVN-71) was sidelined in Guam after an outbreak of the novel coronavirus in late March.

A year earlier, two Chinese J-11 fighter jets had also crossed over the line for the first time in years, which had prompted Taipei to accuse Beijing of violating a hold-held tacit agreement.

Beijing certainly knows that reclaiming Taiwan by force wouldn’t be easy—but as The National Interest has previously reported, it is far from impossible. Only now is Taiwan is finally getting some 66 new F-16 jet fighters to replace some of its older aircraft, in an $8 billion acquisition with the United States despite strong objections from Beijing, but it is likely to do little to alter the overall balance of power in the region.

China possesses hundreds of more advanced fighters than Taiwan, and five dozen new aircraft won’t likely matter much. More worrisome for Taipei should be the thousands of missiles that could overwhelm Taiwan in a surprise attack, but what good would it do to reunite the island with the mainland if it is utterly in ruins? The best defense may be to simply ensure that any invasion would be costly with little for Beijing to gain.