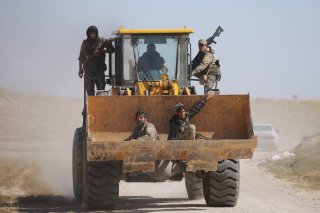 Kurdish-led forces in northeastern Syria announced on Wednesday that they had regained control of the Ghwayran prison after an Islamic State (ISIS) attack freed hundreds of prisoners earlier in the week.

Farhad Shami, a spokesman for the U.S.-backed Syrian Democratic Forces (SDF), said that days of SDF-led operations had “culminated with our entire control” over the prison. Shami stated that all remaining ISIS fighters, who had continued to defend unsecured areas within the prison complex, had given themselves up once escape became impossible.

The raid on the prison, located in the city of Al-Hasakah near the northeastern tip of Syria, was widely described as the group’s most sophisticated attack in Syria since the destruction of its “caliphate” in 2019. At the same time that a multi-pronged attack from the outside managed to breach the prison, the roughly 3,500 detainees started a riot, attacking the prison’s defenders from both sides and overwhelming them in some areas.

During the raid, however, SDF and U.S. troops reinforced the SDF forces at the prison to help repel the attack. Although a number of the prisoners were able to escape, most were later recaptured in the city, and the prison was surrounded by the SDF. The ISIS holdouts surrendered after two days without food and water, according to Shami.

By the time of the final surrenders, more than 180 people had been killed, including at least 120 members of ISIS, around 50 SDF fighters, and several civilians, according to the Syrian Observatory for Human Rights. Hundreds of civilians within Al-Hasakah were also forced to flee their homes to escape the violence.

Roughly 850 children—most of whom had been trained as child soldiers by the terror group—were also incarcerated at the time of the uprising. Shami acknowledged that some of the children had probably been injured during the fighting, but indicated that the operation to retake the prison would have proceeded “with heavy weapons” if it had not been for their presence.

In the run-up to the terror group’s rapid expansion in 2014, ISIS recruited extensively from the military-aged prisoners they freed from Syrian and Iraqi jails. Prisons continue to represent a lucrative target for attacks, as they usually contain experienced veterans already sympathetic to the group’s ideology.

In total, 12,000 suspected members of ISIS have been taken prisoner by Kurdish-aligned forces in northeastern Syria. The Ghwayran prison is the largest in the region and was severely overcrowded prior to the raid.