U.S.-Japan Joint Exercises May Have Sent a Message to Beijing 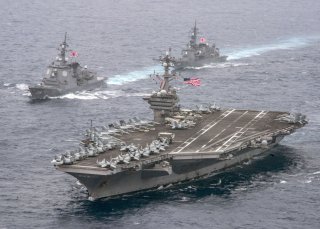 The Pentagon is highlighting the success of a recent U.S.-Japanese joint exercise that was carried out in the Philippine Sea to “conduct lethal sea-denial operations, seize key terrain and guarantee freedom of movement” in maritime and amphibious warfare maneuvers.

The “Noble Fusion” exercise saw elements of the U.S. Navy, Marine Corps, and Air Force operate alongside the Japan Maritime Self-Defense Force. The exercise was designed to strengthen interoperability, joint maneuvers, communications, and coordinated amphibious warfare operations. Conducted during the first week of February near Okinawa and Japan’s southern islands, the exercise aimed to prepare U.S. and Japanese forces for joint, multi-domain attacks in both deep and shallow waters.

Pentagon spokesman John Kirby may have cited the achievements of Noble Fusion to tell China that while the United States might be heavily focused on the Ukraine crisis, Beijing should not view the current circumstances as a window of opportunity to attack Taiwan.

The exercise would appear to be an excellent way to send that message, given that Japan’s southern islands are in the same neighborhood as Taiwan. With this in mind, exercises in the region would place forces within operational range of Taiwan, something which is not likely to disappear from the Pentagon’s radar despite the crisis in Ukraine. The Marine Corps operates with the ability to launch Osprey helicopters, short-takeoff-and-vertical-landing F-35B stealth fighters, amphibious assault vehicles, and thousands of Marines to seize territory or challenge an amphibious assault.

Establishing a forward presence is a key advantage of solidifying connectivity with Japanese maritime and amphibious forces. Geography, range, and proximity could all pose major challenges in any effort to stop a Chinese amphibious assault on Taiwan. Could U.S. Naval forces be close enough to respond in a timely fashion? Perhaps this is why the Navy conducts so many forward operations in the region. Japan’s southern islands, therefore, offer a vital strategic launch and staging area for any kind of maritime force assembled to deter, challenge, or stop Chinese aggression.

The ability to quickly move thousands of troops on amphibious platforms would be a fundamental aspect of any operation in the region. According to Global Firepower’s 2022 rankings, Japan has as many as one million reserve troops, forces that could be needed for rapid deployment in the South China Sea or Taiwan in the event of war.