The U.S. Military Is Getting New Landing Craft. Here's Why That Matters. 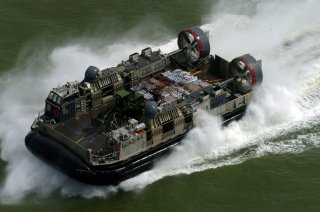 The U.S. Navy is moving quickly to acquire and deploy a new fleet of high-tech ship-to-shore amphibious landing craft to expedite newer strategies of amphibious assault. This plan would use fast-moving, tank-transporting vessels able to find and penetrate enemy shorelines—and off load forces for attack.

The service is now building its first 15 Ship-to-Shore Connectors (SSC) through a $386 million deal with Textron Systems to bring a new, high-tech force of craft to replace the Navy’s longstanding, combat-tested Landing Craft Air Cushions.

Also, SSC’s new Rolls Royce engines have more horsepower and specialized aluminum to help prevent corrosion, when compared with existing LCACs. Textron engineers also say the SSC is built with digital flight controls and computer automation to replace the traditional yoke and pedals used by current connectors. As a result, on-board computers will quickly calculate relevant details such as wind speed and navigational information, according to Textron information.

Navy’s 72 existing LCACs, in service since the 80s, can only transport up to 60-tons, reach speeds of 36-knots and travel ranges up to 200 nautical miles from amphibious vehicles. The first several SSCs, which have been built and launched on the water, bring a new level of computer networking, combat-power transport technology and emerging elements of advanced maritime propulsion systems. The new SSC’s have also moved to a lower frequency for ship electronics, moving from 400 Hertz down to 60 Hertz in order to better synchronize ship systems with Navy common standards. Along with these properties, the new craft uses hardware footprint reducing advances to lower the number of gear boxes from eight to two.

In effect, future “ship-to-shore” amphibious attacks will look nothing like the more linear, aggregated Iwo Jima assault. A Naval War College essay on this topic both predicts and reinforces Navy thinking.

Dispersed approaches, using air-ground coordination and forward-positioned surveillance nodes, can increasingly use synchronized assault tactics, pinpointing advantageous areas of attack. Not only can this, as the essay indicates, exploit enemy weakness, but it also brings the advantage of avoiding more condensed or closely-configured approaches far more vulnerable to long-range enemy sensors and weapons. Having an SSC, which can bring a heavier load of land-attack firepower, weapons and Marines, helps enable this identified need to bring assault forces across a wide-range of attack locations. None of this, while intended to destroy technologically sophisticated enemies, removes major risks. After all, Russian and Chinese weapons, including emerging 5th-generation fighters, DF-21 anti-ship missiles claimed to reach 900-miles, and rapidly-emerging weapons such as drones, lasers and railguns are real concerns.

The Navy accepted delivery of the first of the next generation landing craft, Ship to Shore Connector Craft 100, on February 6, 2020, a statement from Naval Sea Systems Command said. Craft 100 is the developmental unit for the next-generation landing craft and will be located in Panama City, Florida where additional testing and crew training will be conducted.”

The second craft, LCAC 101, has been going through Navy Builder’s Trials for assessment of its operational readiness, the Navy said.