U.S. Navy Aircraft Carriers: How Vulnerable to a Torpedo Attack? 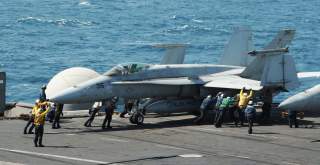