The U.S. Navy is Rolling Out Its Upgraded Osprey Variant 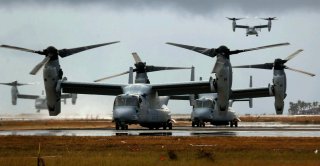 The U.S. Navy announced on February 18 that the maiden deployment of its CMV-22B Osprey variant was an “operational success.” The Navy explained that its version can fly much farther than the original variant currently in service with the U.S. Marine Corps.

The Navy added that “with 50% more internal fuel than the Marine Corps’ Osprey variant, CMV-22B can transport up to 6,000 pounds of cargo and personnel over a 1,150 nautical mile range.” According to the statement, the Navy “redesigned the forward sponson fuel tanks and added two wing fuel tanks to add capacity and extend the flight range.”

Although extending the combat vehicle’s range is of obvious utility, it is particularly useful for the Navy due to its growing focus on the Indo-Pacific region.

The Pacific Ocean is the world’s largest ocean, necessitating a greater ferry range for ships and aircraft than in other theaters. With this in mind, the CMV-22B will play a vital role in the future.

The Navy recently showcased its “air wing of the future,” a mix of fourth- and fifth-generation fighters that leverage their unique abilities. With its superior transport and ferry range, the CMV-22B will play an essential role in the Navy’s future carrier aircraft structure.

The Navy’s CMV-22B marked its first time at sea with an eight-month-long deployment aboard the USS Carl Vinson. With a 98 percent mission completion rate and a mission capable rate of 75 percent, the maiden deployment was a success.

“As our fighter/attack and surveillance aircraft expand in both capability and size to extend the range of the carrier air wing, we must also evolve our support aircraft, in tandem, to supply those platforms. The CMV-22B will transport cargo and personnel to outfit the most advanced aircraft carrier strike groups as we continue to meet the needs of our missions worldwide,” explained U.S. Marine Corps Col. Brian Taylor, the V-22 Joint program manager.

Bell Boeing, the contractor behind the V-22 design, has delivered fourteen CMV-22B Ospreys and has another forty-four on order for the U.S. Navy. They are expected to reach full operational capability by 2023.