The U.S. Navy Wants to Ditch These Brand New Ships 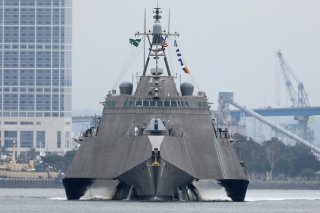 The U.S. Navy would like to divest from both cruisers and Littoral Combat Ships (LCS) to free up funding for future ship projects. The ships are hardly old—they entered service with the Navy in 2015 and 2016, respectively—and if they are retired in 2024, they will have served less than a decade.

The Navy released a potential long-range shipping plan and offered three different procurement schemes. The 2023 thirty-year shipbuilding plan shows that the Navy would like to decommission two Littoral Combat Ships, the USS Jackson, and the USS Montgomery.

The Navy would also like to retire three Ticonderoga-class cruisers in 2024—the USS Antietam, the USS Leyte Gulf, and the USS Shiloh. The Navy’s Ticonderogas are aging vessels and potentially unsurvivable in a high-end conflict against a peer enemy.

The Navy’s three shipbuilding proposals would result in 316, 327, or 367 ships by 2052. However, the Navy noted that “the ability of the industrial base to support” the largest fleet option “has not been independently assessed.”

Still, the Navy is upbeat about the ability of the private industry to build new vessels. In a press release, the Navy chose to highlight Chief of Naval Operations Admiral Gilday’s recent visit to Bath Iron Works, one of the hearts of American shipbuilding.

“The work being done here in Maine is critically important to our Navy,” said Admiral Gilday. “The entire workforce of Bath Iron Works is delivering cutting edge capabilities at a critical time for our nation.” Sen. Susan Collins of Maine accompanied America’s top sailor.

“It was a pleasure to welcome back Adm. Gilday to Bath Iron Works, where he had the opportunity to see firsthand the tremendous skill and dedication of employees who are building the Navy’s most capable ships,” said Senator Collins.

“We also met with the commander of the future USS Carl M. Levin. It is reassuring to know that the brave men and women of the Navy will crew a ship built by the world’s best shipbuilders.”

The Senator also emphasized the threat posed by both Russia and China. “Increasing the size of our Navy fleet is imperative to our national security in order to counter the rising aggression by Russia and China,” Collins said.  “As a senior member of the Defense Appropriations Subcommittee, I will continue to work to ensure that BIW has the resources it needs to support our Navy.”

The Navy’s shipbuilding plan emphasized that the largest—the 367-ship plan—was most desired. According to the plan, “assuming no real budget growth, the two low ranges of the plan do not procure all platforms at the desired rate … which industry needs to demonstrate the ability to achieve, but do maximize capability within projected resources, industrial factors, and technology constraints to build the most capable force.”

“Overall, this approach accepts risk in capacity in order to field a more capable and ready force.”