The U.S. Navy Wants to Test Its Unmanned Battle Fleet 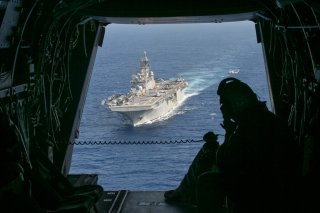 The U.S. Navy is already ramping up its efforts to introduce and deploy large numbers of interwoven, armed surface drones, a move bringing an entirely new sphere of tactics, techniques and procedures. These surface drones include medium, large and small Unmanned Surface Vehicles (USVs).

The next step will be assembling those unmanned systems for an exercise.

Earlier this week the U.S. Pacific Fleet announced that it will deploy a combination of early developmental undersea, surface and more mature aerial unmanned systems to the Indo-Pacific next year to address a battle problem and that will test the current utility of the assets now available, reported USNI News.

“We’re shooting for early 2021 to be able to run a fleet battle problem that is centered on unmanned,” Rear Adm. Robert Gaucher, director of maritime headquarters at the U.S. Pacific Fleet, said on Tuesday at the Defense, Protection, Security virtual conference that was sponsored by the Association for Unmanned Vehicle Systems International (AUVSI). “It will be on the sea, above the sea and under the sea.”

Gaucher added that while the details have been fully worked out, the exercise will entail a command-and-control aspect, and will demonstrate how autonomy can fit into addressing actual fleet problems.

The U.S. Navy has been slowly starting to deploy unmanned systems, and these mostly include small-scale unmanned surface vessels.

In July, the U.S. Navy awarded L3Harris a $35 million contract to design and fabricate a prototype medium unmanned surface vehicle (MUSV), which is expected to be delivered for testing by the end of 2022. This is one of the latest efforts by the Department of Defense (DoD) to develop a fully automated robotic warship that could be capable of locating and tracking enemy submarines and other maritime threats.

In addition, the Navy is also committed to large unmanned surface vessels (LUSV), which could be akin to an external weapons platform that is controlled remotely by larger manned surface combatants.

While the American fleet throughout its history has shifted back and forth between naval concepts favoring fewer large ships or more smaller ones, the fleet architecture currently under development for the first time includes large numbers of robotic vessels. The question now is how those can be integrated into the fleet.

It was in 2018 that PACFLEET reintroduced the concept of “fleet battle problems” as scenarios where an operational unit is given a training mission designed to test a commander and the crew on an aspect of high-end naval warfare.

The concept dates back to the 1920s and was used by the U.S. Navy until 1940. The term was revived in 2016 under Admiral Scott. H. Swift, where the Fleet Problem was conducted as a once-a-year exercise in which U.S. Naval forces would engage in a mock battle – and in some cases this would involve part of the force playing the part of a European or Asian Navy. The Fleet Problems were considered the culmination of the Navy's annual training maneuvers.

The announcement of next year's exercise comes as the Navy is beginning to test the capabilities of its unmanned systems and how these can be best integrated within the fleet.

“Everyone wants to talk about the extreme case,” said Vice Adm. Ron Boxall, director of force structure, resources and assessment (J8) on the Joint Staff, during the AUVSI conference.

“We are a long way from the extreme case,” added Boxall. “What we need to do is get things out there and take these baby steps along the way. We have to be able to give confidence that we are proceeding at a good pace, but not to the point of stupidity. Because a lot of these platforms are smaller, we can demonstrate things on a much smaller scale as we bring in both capacity and capability further on down the cycle.”