The U.S. Navy's New Columbia-Class Nuclear Submarines Might Be Delayed 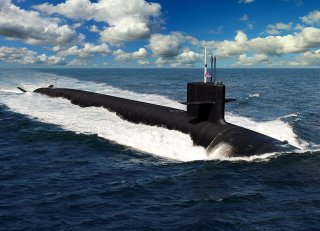 The U.S. Congress is being asked to pass an emergency spending measure to ensure that the Navy’s new Columbia-class submarines can be laid down for construction, Defense News reported, citing a document the media group had received.

According to the cited document, unless Congress intervenes, the first two Columbia-class hulls will be delayed as part of a stopgap measure to prevent a government shutdown. The 2020 fiscal year ends this month, and Congress would have to pass a new fiscal package before then to avert a shutdown.

With that said, What makes the Columbia-class so special — and why would it be so bad to delay their entry into service?

Columbia-class: A Very Special and Important Class of Submarine

The Columbia-class will be the Navy’s most advanced submarines ever built. The 12-hull class will take over strategic nuclear deterrence patrols from the older Ohio-class--the first of which laid down in the mid-1970s and entered service beginning in the early 1980s--and is made up of 18 submarines in total.

Columbia’s will likely have several advanced features. First and foremost among these is their propulsion system. While the Columbia-class will be nuclear-powered, their propellers will be powered by an electric drive which is significantly quieter than the mechanical drive that most submarines currently use.

The Columbia’s will also likely feature advanced anechoic tiling, essentially rubberized tiles with air bubbles embedded in them that are mated to the outside of a submarine’s hull. The sonar-absorbent tiles help to mute enemy sonar pings — an essential feature for a submarine that is intended to remain undetected.

The Columbia-class will also feature is a new warhead for their Trident intercontinental ballistic missiles, the W93. The warhead, which was first mentioned by the Trump administration earlier this year, is rather mysterious.

It is unclear if the new warhead would replace W76 and W88 warheads currently in service, or be reserved for use only with the Columbia-class. The new warhead — the first new nuclear warhead in at least several decades — may face budgetary delays if it too doesn’t get a funding exception from congress.

If emergency funding is secured by Congress and construction goes according to schedule, the lead submarine of the Columbia-class is slated to enter service sometime in 2028 — though if delayed, the Ohio-class may have to remain in service. That could be an issue, as the oldest of the class is nearly 40 years old and is in need of replacement. Here’s to hoping a funding solution is found.