The Vast Majority of Active-Duty Military Deaths Happen in the U.S.—What Is Going Wrong? 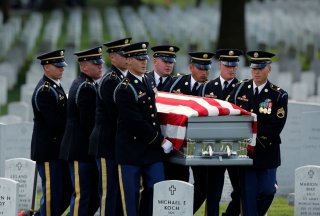 It is the stuff of nightmares: losing your only child, a U.S servicemember, not to war in a far-flung place but while on-duty right here on home soil.

For Patrick Caserta, a retired Navy career counselor with 22 years of service himself, that became a searing reality on June 25, 2018. His 21-year-old son Brandon—depressed and driven over the edge with the public berating and bullying from the Command—walked into a helicopter rotor at the Helicopter Sea Combat Squadron 28 out of Norfolk, Virginia.

“We had been trying to handle this properly and the best way we could before any of this happened, but the Command would not cooperate or listen to me,” a grieving Patrick said. “And then when we went into the area, someone should have tackled him. No-one rendered any First Aid, and when we tried to get all the answers, (the military) just covered everything up.”

Sadly, the Caserta family's plight has fallen into the wayside of a statistic in an ever-burgeoning file of non-combat deaths in the U.S. military.

According to the Congressional Research Service (CRS), nearly three-quarters of all active-duty U.S military deaths between 2006 and 2020 occurred not in the war theater of Iraq or Syria or Afghanistan, referred to as Overseas Contingency Operations but in places of no conflict. And of that 74 percent, 93 percent of deaths happened in the United States of America.

“Between 2006 and 2020, a total of 17,645 active-duty personnel have died while serving in the U.S. Armed Forces,” the report stated. “Approximately 13,068 service members have died in circumstances unrelated to OCO operations since 2006. On average, this amounts to approximately 913 non-war-related deaths each year (excluding 2020).”

About 31.8 percent of all deaths were deemed an accident, followed by 24 percent as self-inflicted, 17.5 percent were illness/injury, and 3.2 percent homicide. Killed in action, died of wounds, terrorism, and while captured—combined—made up 20.5 percent. The remaining 2.9 percent was marked as pending/undetermined.

As the Caserta's can painfully attest, the number of suicide deaths among military service members is a cause of steep concern. That figure increased at a dramatic rate in the fourth quarter of 2020, as per the latest quarterly report released by the Pentagon, with the military recording 156 deaths by suicide among all services—a 25 percent jump from the 125 documented the previous year.

Some activists, like Jennifer Norris—an Air Force veteran who runs the Military Justice For All to pay homage to those killed not in combat—suspects that a significant portion of those deaths are what she calls “murder by suicide.”

“If a kid goes into the military, they can't leave their situation if it isn't working out for them. Instead, they are bullied and hazed until they kill themselves,” she lamented. “And the leadership is going to treat you even more like a pain if you reach out for help.”

In due course, the Caserta family—starting in 2018—pushed for a suicide prevention legislation known as “The Brandon Act,” which sought to “improve the process by which a member of the Armed Forces may be referred for a mental health evaluation.”

It died in Congress last year, but Patrick hasn't given up and is hopeful it will be introduced next month.

“We are going after toxic abuse of leadership and abuse of power,” Patrick affirmed. “People think this will never happen to them, but if you have a son or daughter in the military, that doorbell can ring at any time.”

The CRS also pinpointed “accidents” as a leading cause of active-duty deaths on American bases, noting that 32 percent of military deaths resulted from training accidents, outpacing the 16 percent of troops who were “killed in action” over that same period. Yet, the “accidental” tragedies have become all-too-common to the daily news grind.

Last month, an elite U.S. Army paratrooper assigned to the 82nd Airborne Division died at Fort Bragg, North Carolina, “while conducting airborne training operations,” with few details on what went wrong. In September, another 82nd Airborne paratrooper suffered a parachute malfunction during a static-line jump and plummeted to his death at Fort Stewart, Georgia.

A Navy airman also died last month, days after attempting to save fellow service members during a high-risk evolution in Aviation Rescue Swimmer School at Pensacola, Florida. In January, a Green Beret Master Sergeant lost his life in a free-fall training exercise near Eloy, Arizona.

Last July, eight Marines and one sailor drowned—trapped inside an almost 40-year-old amphibious assault vehicle (AAV)—while training at Camp Pendleton, California. The mishap marked Pendleton's third in a decade involving an AAV. In 2017, 14 Marines and a corpsman endured severe burns when their AAV HIT an exposed gas line on base, and in 2011 a Marine sergeant was killed when the AAV accelerator jammed and propelled him underwater.

The spike in accidents, in particular, has led to a one-year probe by the Government Accountability Office slated for release in May, a spokesperson said.

Homicide is also emerging as an alarming cause of death on U.S. turf. Late last year, the issue of sexual assault—and murder—was cast into the net of public scrutiny after Vanessa Guillen, a soldier at Fort Hood, Texas, went missing. Her mutilated body recovered weeks later in a shallow grave, with the suspect—believed to have sexually harassed and killed the 20-year-old – killing himself when confronted by police last summer.

At least 159 For Hood soldiers, as per a New York Times analysis, died for reasons other than combat between 2016 and 2020.

So what is going wrong?

Despite the “preventability” of most U.S. troop deaths, whistleblowers and critics contend that the problem is only getting worse given that few are ever held accountable—whether it's perpetuating a noxious culture not suited to some servicemembers or allowing shoddy equipment inspections or inadequate training measures.

Norris also stressed that a big part of the problem lies in the Feres Doctrine—1950 legislation that prohibits service members from collecting damages from the government for personal injuries experienced amid their duties, and also stops families from lodging wrongful death or loss of consortium actions when a service member is killed or injured.

“If a private U.S. company racked up so many deaths, they would be sued and forced to make improvements and change,” she argued. “But in our military, there is no incentive to do that, so it just keeps continuing.”

Natalie Khawam, the Florida-based lawyer behind the Guillén family's fight for justice, concurred that the Feres Doctrine has become a sore point. She emphasized that it is routinely misused and is applied to “every situation,” rather than just in combat, which was the original intention.

“The Feres is supposed to be about wartime. And I am tired of getting emails and phone calls from distraught parents whose kids are dying and the family have no recourse,” she added. “There is no workplace in the world that causes this much death, and something has to change.”

Hollie McKay is a writer, author, and war crimes investigator. She is a former reporter for FoxNews as well.