These Conflicts Were the Most Destructive in All of Human History 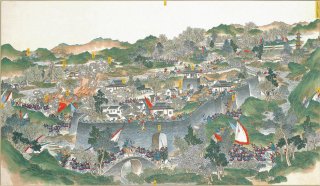 Here's What You Need to Remember: The two World Wars accounted for the most deaths from a conflict in human history, but there are some others that were proportionately just as deadly.

There are some lists that many nations would happily not be on – and this includes the deadliest conflicts in human history. The human toll has steadily increased in recent centuries, due largely because of the increased lethality of weapons. As men have made better devices for taking lives, the body count has tragically gone up accordingly. Yet, throughout history, there have been some devastating examples of human carnage.

Here is a recap of the deadliest conflicts through human history.

The Wars of Antiquity:

While it is impossible to chronicle the casualties of many ancient wars, in the 50-year long Greco-Persian Wars of the 5th century BC, less than 80,000 were killed. By comparison, the century-long Punic Wars between the Roman Republic and Carthaginian Empire may have claimed as many as 1.8 million lives.

The eight-year-long Gallic Wars that the Roman Republic engaged in during the 1st century BC saw upwards of a million casualties, while the Jewish-Roman Wars of the 1st century AD likely accounted for as many as 2 million deaths.

Of course, those casualties seem almost insignificant to the carnage that occurred in China during the 2nd and 3rd centuries. The Three Kingdoms War (184-280 AD), which was a struggle between the Han dynasty states of Wei, Shu and Wu, saw the end of the Han Dynasty along with fighting, disease, and famine cost an estimated 40 million lives.

The medieval period, or Middle Ages, was a dark time in human history due to both the spread of disease and nearly non-stop military conquests. Hundreds of millions perished from starvation and disease brought on by the conflicts, which included the Moorish Wars between the Moors and the Byzantine Empire, which saw some 5 million killed in a span of just 14 years in the 6th century.

The Spanish Reconquista, which began in the early 8th century and lasted for nearly 800 years, accounted for 7 million dead. By comparison, the decades-long War of the Roses, which has been chronicled in numerous Shakespeare plays and saw the end of the Plantagenet dynasty, accounted for just upwards of 50,000. Of course among those were Kings Henry VI and Richard III, while the nobility suffered an unusually high rate of deaths.

The Middle Ages saw one of history's longest wars – the Hundred Years' War, which lasted from 1337-1453 AD, and it accounted for as many as 3.3 million deaths. In comparison, in just less than a decade the An Lushan Rebellion (755-763), fought between the Tang Dynasty in China and Yan State, claimed as many as 36 million lives. The Conquests of Timur (1370-1405) also accounted for upwards of 20 million deaths.

The centuries-long Crusades (1095-1291), which were known for brutality and all-out war on both sides, saw just some 3 million deaths but paled in comparison to the Mongol conquests (1206-1368).

The tribe of nomadic horsemen from Central Asia conducted a hundred-year campaign of conquest that subjugated most of Eurasia. During the 13th century, the Mongol Empire systematically conquered modern-day Russia, China, Burma, Korea, all of Central Asia, India, Iran, Iraq, Turkey, Bulgaria, Hungary, and Poland. As an example of Mongol brutality, the Persian city of Nishapur was destroyed in 1221 AD by Mongol forces who reportedly killed as many 1.7 million people living in and around the city. In their conquest of Baghdad, then the capital of the Abbasid Caliphate, the Mongols embarked on a week-long killing spree that killed 200,000 to 1,000,000 inhabitants of the city. In total, the Mongol conquests may have accounted for some 40 million deaths!

While it is easy to think of the wars between the Christians and Islam as having a significantly high body count, in fact the Christians did a very good job of killing each other from the 14th to 17th centuries. Some 4 million may have been killed in the French Wars of Religion in the 16th century, while the Thirty Years' War resulted in the death of 11.5 million – and has been considered as devastating for Germany as the 20th century's World Wars! It was fought between Catholic and Protestant states in Central Europe from 1618 to 1648. The war eventually drew in the great powers of Europe, resulting in one of the longest, most destructive and deadliest conflicts in European history.

The Napoleonic Wars, which lasted from 1803-1815, devastated Europe again and cost upwards of 7 million lives. It wasn't a single war but was rather a series of conflicts between the French Empire and the coalitions that fought it: including the War of the Third Coalition, the Fourth, the Fifth, the Sixth and the Seventh and final coalition.

The American Civil War is now remembered as the bloodiest conflict in the history of the United States, and it claimed the lives of possibly as many as 1 million Americans. But it was far from the deadliest wars of the 19th century.

The Taiping Rebellion (1850-1864) began when Hong Xiuquan, a religious fanatic, led a revolt against the Qing Dynasty. That revolt started in southern China and spread as far north as Nanjing before it was stopped in 1864 by a Qing army led by Western military officers. The rebellion was eventually put down, but not before anywhere from 20 to 30 million people lost their lives.

Even before the Taiping Rebellion ended, the Qing were fighting another uprising – known as the Dungan Revolt – against both the Hui (Chinese Muslims) and Kashgaria, who were supported by the British and Ottoman Empires. While it ended in a Qing victory, approximately 20 million died – mostly caused by famine and migration brought about by the war.

Modern Wars of the 20th and 21st Centuries:

The two World Wars accounted for the most deaths from a conflict in human history, with the First World War accounting for as many as 40 million, which includes those first victims of the Spanish Flu; while the Second World War "earns" the infamous distinction of remaining the deadliest conflict. In total, 60 to 80 million were killed between 1939 and 1945, with only about one-quarter of the victims being military.

What is also notable is that those figures don't take in those killed in the Russian Civil War (1917-1922), which could add upwards of another 9 million to the butcher's bill, while the Second Sino-Japanese War – which was part of the greater Second World War – accounted for as many as 20 million deaths.

Civil Wars of the 20th and 21st centuries have also been brutal and deadly. Some 11.7 million Chinese were killed in its decades' long civil war from 1927 to 1949, while the Korean War and Vietnam War (arguably both civil wars) saw some 4.5 million and 4.3 million deaths respectively.

The high death tolls have sadly shown no signs of slowing down either; the Nigerian Civil War was responsible for as many as 3 million casualties. Moreover, the most recent Congo Civil War (1998-2003) earned the distinction of being the deadliest war in modern African history. Around 5.4 million were killed – with genocides accounting for a large number of causalities, while disease and famine also played a factor.