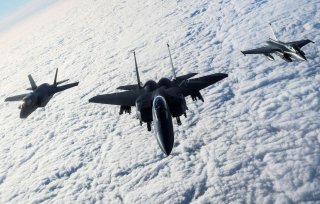 A group of fighter jets, including U.S. Air Force F-15C Eagles and F-15E Strike Eagles, all assigned to the 48th Fighter Wing, Royal Air Force in Lakenheath, England, fired four AIM-120B missiles on March 3. The shots were fired as part of “a live fire training mission” over the Atlantic, as reported by military.com.

“The training employed munitions against a drone target, testing the pilot’s combat readiness in a peacetime environment to ensure full capability during a wartime setting,” the Air Force’s press release said.

A video released on the YouTube channel of Airailimages showed the flight and the missiles, including video of the pilots inside the cockpit. The video was credited to Staff Sgt. Rachel Maxwell.

The 48th Fighter Wing is the only U.S. Air Force F-15 wing based in Europe.

The AIM-120 Advanced Medium-Range Air-to-Air Missile, or AMRAAM, was first manufactured by Hughes, and later by Raytheon. It’s been described as the world’s most popular missile of its kind, exported all over the world. However, back in 2016 concerns were raised that the missile was becoming “maxed out.”

As for the jets, earlier this month, there was a report about the UK seeking to possibly scale back its order of the Lockheed Martin F-35 Lightning II. The UK’s Ministry of Defence (MoD) is said to be debating cutting its previous order of 138 of the jets down to just 48.

The Sunday Times had reported that “an order for 90 more F-35 Lightning combat jets is to be canceled in favor of the Tempest fighter, built-in Lancashire, while 24 older Typhoon fighters will be retired early. Whole fleets of aircraft will be taken out of service as drones become ever more common.”

A different report, back in January, had said the opposite, that the RAF might buy more F-35 jets than previously thought, as part of recent plans by the British government to increase its defense budget.

“We know we need to increase the number of F-35Bs to support the [Royal Navy] carrier through to its out-of-service date,” Air Marshal Richard Knighton, the deputy chief of the defense staff for capability, testified before Parliament back in December. He added that the definitive decision will be made in the 2025 timeframe.

“The precise number will depend a bit on the work we do and the investment we are making on the FCAS.”