War Ready: Could the U.S. and Its Allies Win a War Over Taiwan? 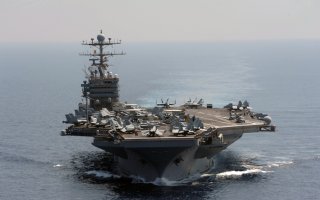 Should large portions of China’s two-million-strong army and 35,000 armored vehicles succeed in landing on and occupying Taiwan, what options do the United States and its Pacific allies have?

The principal impediment to a successful rapid counterattack is geography. According to Global Firepower, South Korea operates over 2,000 tanks, Japan maintains a fleet of roughly 1,000 tanks, and Taiwan has 1,160 tanks.

However, should China land large numbers of its 3,000-strong tank force and 1,970 self-propelled howitzers, could any kind of countervailing ground response force get there in time? A quick look suggests not.

Southern Japan and South Korea are, depending on where ships depart, somewhere between 500 and 1,000 miles away from Taiwan. While this would possibly put Taiwan in range of tanker-refueled or sea-launched fighter jets, as well as some long-range missiles, a heavily armored force is extremely difficult to deploy and would need to be pre-positioned.

This challenge may explain why there have been so many reports about Taiwan’s acquisition of Abrams battle tanks.

Could there be enough mechanized armored resistance to slow down a Chinese incursion long enough to enable Japanese, South Korean, and forward-placed U.S. forces to respond? Unless the United States and its allies took a measured and potentially highly controversial step to pre-position a large-scale armored force prior to any invasion, this does not appear likely.

Training and readiness may also be huge factors for Taiwan. Global Firepower notes that the island nation has as many as 1.6 million reserves. South Korea is listed as operating an extremely large reserve force of 3.1 million personnel. While Seoul is prepared for a North Korea-related contingency, these forces could certainly have an impact if Taiwan is attacked. How trained, equipped, and ready would these forces be?

Do they have weapons, equipment, and training? Most of all, how fast can they get to Taiwan? Australian land forces would not only be extremely far away but also quite small in numbers. Global Firepower cites Australia as operating only 60,000 active-duty soldiers.

How do U.S. numbers stack up? The United States Indo-Pacific Command (INDOPACOM) website says that the U.S. Army has approximately 106,000 personnel in the theater, from one Corps and two divisions. The United States operates a large number of bases in Japan and has troops in South Korea, but would that be enough to face a Chinese military with 2 million active-duty personnel?

The U.S. Army also has over 300 aircraft and five watercraft assigned throughout the Pacific area of operations, including in Japan, South Korea, Alaska, and Hawaii, according to the Indo-Pacific Command website.

Defeating Chinese forces in Taiwan would not be a small task. A look at the size of a combined force consisting of U.S., Japanese, and South Korean troops seems to suggest that, at the very least, defeating Chinese troops in Taiwan is possible. A combined U.S., Taiwanese, Japanese, and South Korean land force operating with air superiority could ultimately prevail. The question for many is, at what cost?

Achieving air superiority would almost certainly rely upon the U.S. Pacific Fleet. INDOPACOM says that the command operates 200 ships including five aircraft carrier strike groups and with as many as 1,100 aircraft. These sea-launched aircraft could ultimately be a deciding factor in stopping a Chinese amphibious assault and establishing air superiority to support a ground counterattack in Taiwan.