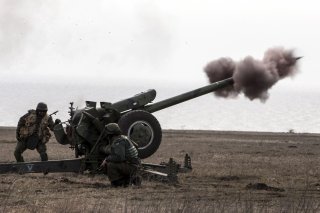 As the Russian invasion continues into its fifth month, cleavages are emerging between Kyiv and its Western allies over how best to prosecute the Ukrainian war effort.

While top Ukrainian officials are pushing to receive as many western-supplied weapons as soon as possible, the Biden administration is balancing its military aid to Kyiv with its domestic combat readiness and concerns that the equipment is being delivered too quickly and in too great a volume to be used by Ukrainian troops on the ground.

According to The New York Times, U.S. officials say pulling large numbers of Ukrainian artillery specialists from the front to train them “could weaken Ukrainian defenses, accelerate Russian gains and make any future counterattacks more difficult to carry out.” Others have warned that the hodge-podge way different weapons systems are being delivered to Ukraine from dozens of Western countries is adversely impacting the overall combat effectiveness of Ukraine’s forces. “The current approach by which each country donates a battery of guns in a piecemeal way is rapidly turning into a logistical nightmare for Ukrainian forces, with each battery requiring a separate training, maintenance and logistics pipeline,” The New York Times reported, citing a report released by the Royal United Services Institute.

The New York Times reports that Pentagon officials have expressed concerns about “hurting U.S. combat readiness if the war continues for months or longer.” The unprecedented weapons transfer program to Ukraine has depleted U.S. stockpiles of critical munitions, with industry insiders warning that it could take years to refill domestic inventories of crucial weapons systems like Stinger surface-to-air missiles.

Some western officials and experts appear to be staking their hopes on the calculation that the looming battle of attrition in southern and eastern Ukraine will increasingly favor the defenders as Russia reportedly struggles to replenish its dwindling stocks of short-range ballistic and cruise missiles. “The Russians are literally scraping the bottom of the barrel for troops and replacement equipment, Frederick Hodges, a former U.S. Army commander,” told the New York Times.

The Russian military, for its part, appears to have shifted its strategy from seeking decisive battlefield victories to slowly grinding down the outnumbered and outgunned Ukrainian forces. The Kremlin has signaled confidence in its ability to mobilize the considerable manpower and military-industrial resources required to sustain a prolonged conflict in Ukraine. However, Russian president Vladimir Putin’s overarching war aims remain opaque.