What the U.S. Navy Wants in Its New Guided Missile Frigates 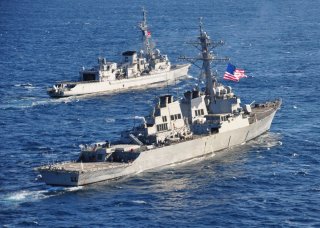 These plans for the ship are taking a large step forward, following the Navy’s recent ship development award to Marinette Marine Corp. for up to 10 new Guided Missile Frigates (FFX(X)). Concepts for the ship include an advanced, heavily armed Frigate with a stronger, reinforced hull, space armor, over-the-horizon missiles and a wider complement of additional high-tech weapons. Sure enough, according to Navy officials, the ship is now being designed as much more than a “toughened” Littoral Combat Ship, but a ship with an even wider combat scope to include additional air-defenses, AEGIS radar systems and major missile attack options with Mk 41 Vertical Launch Systems.

Following years of debate and deliberation regarding what particular weapons and technology configuration would ultimately take shape for the new vessel, the service appears to have identified a handful of specifics. In a Navy report, service officials identified some of the intended missions and weapons applications for the ship. Initial specs include Enterprise Air Surveillance Radar, a Baseline Ten AEGIS Combat System, a Mk 41 Vertical Launch System (VLS) and MK 57 Gun Weapon Systems, among other things. This kind of baseline configuration is of course engineered with the technical foundation necessary to integrate new weapons, computer technology, electronics and information warfare systems as they emerge. A Navy official described it as having “countermeasures and added capability in the EW/IO (Electronic Warfare/Information Operations) area with design flexibility for future growth.”

Upon initial conception, it was not instantly determined that the new ship would include VLS; clearly the service saw the need to more heavily arm the new ship, in keeping with its increased lethality and Distributed Maritime Operations strategic approach for aggressively arming its surface fleet for major warfare on the open seas.

Navy officials tell The National Interest that the new FFG (X) “will have multi-mission capability to conduct air warfare, anti-submarine warfare, surface warfare, electronic warfare, and information operations.” As part of its attack strategy for the ship, Navy officials add the ship will “will incorporate Standard Navy systems across the radar; combat system; command, control, communications, computers and intelligence; and launcher elements.” Along these lines, arming the ship with EASR radar is consistent with this plan, as the radar is also arming amphibs and some carriers as a Raytheon-built multi-mission air-defense system.

The deal, which is a contract for detailed design and construction, includes a measure of flexibility, meaning the Navy and its industry partners are likely to continue refining requirements and potential weapons and technology for the ship as it further comes to fruition.

Significantly, the Navy’s emerging weapons and technology structure for its Frigate seem to align with some of the service’s initial requirements, mission scope and technology for the ship. A Navy statement several years ago said the platform will “employ unmanned systems to penetrate and dwell in contested environments, operating at greater risk to gain sensor and weapons advantages over the adversary.” A well-armed ship, which is what the emerging structure of the ship clearly seems to be, is consistent with the Navy’s previously articulated plan for the ship, which envisioned a platform that could travel in substantial aggregated combat scenarios such as Carrier Strike Groups and Expeditionary Strike Groups. In addition, it is clear that the service seeks a ship able to function autonomously, control undersea and aerial drones and perform disaggregated or more independent missions.

For instance, the Navy’s Request for Information for the Frigate released several years ago states: “concepts of employment for this type of ship will include integrated operations with area air defense capable destroyers and cruisers as well as independent operations while connected and contributing to the fleet tactical grid. Additionally, this platform must defend against raids of small boats.”

The ship will be manned with a crew of up to 200 sailors, Navy officials say. A follow-on deal is planned for 2026.