Why the Reising Submachine Gun Is Best Left Forgotten 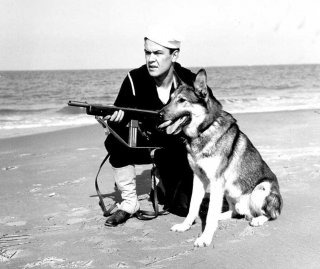 Before America’s entry into the Second World War, the U.S. military developed the M1 Garand, the weapon General George S. Patton called, “the greatest battle implement ever devised.” However, there were “other” attempts to produce a main battle rifle.

As The National Interest previously reported, these included designs from Brigadier General John T. Thompson and Melvin Johnson, but also forgotten was the effort to develop a new submachine gun for the U.S. military.

While the Johnson rifle and light machine gun both had merits, the Reising submachine gun is one best left forgotten!

Designed by Eugene Reising, who had been an assistant to firearm designer John M. Browning, and patented in 1940, his submachine gun was innovative for its time. Unlike most submachine guns of that era, the M50 Reising fired from a closed bolt—a feature not widely seen until the 1970s and 1980s. At 6 pounds, 12 ounces it was lighter than the Thompson submachine gun, cheaper to produce and still capable of firing 550 rounds per minute.

The M50 Reising featured a full stock, which was not common with submachine guns at that time either. It featured a delayed blowback operation and offered selective fire. Feed was from a twenty-round box magazine, but twelve-round single stack magazines were also produced for training.

Its manufacturer, Harrington & Richardson Arms Company (H&R) of Worcester, Massachusetts produced the M50 as well as the M55, which was identical except that it had a folding wire buttstock, and a barrel that lacked a compensator and was half an inch shorter. The company also introduced the M60, which had a full stock and was a semi-automatic version with a longer barrel. Initially the M50 and M55 were marketed to police and military, while the M60 for private security guards.

Even before the U.S. entry into World War II, the military was short on weapons—with most of the M1 Garands going to the U.S. Army. As there was also a shortage of Thompson submachine guns, to fill the void for weapons, the USMC adopted the Reising in 1941 with 4,200 authorized per division with approximately 500 authorized per each infantry regiment. The first batches of the the M50 and M55 versions were issued to Marine Raiders and paratroopers and went off to the Pacific Island of Guadalcanal.

However, instead of becoming a legendary firearm that proved it was as tough as the marines who carried it, the Reising was a dismal failure.

The weapon proved utterly unreliable in the sand and mud, and according to some accounts, Lieutenant Colonel Merritt A. Edson, commander of the 1st Marine Raider Battalion, went so far as to order the submachine guns to be tossed in the rivers on Guadalcanal, and he suggested that instead the marines use the proven bolt-action Springfield 1903.

One issue was that the weapon was overly complicated in design and difficult to maintain. Moreover, the biggest problem was that many of the parts were hand-fitted in the factory. When it functioned, the Reising was more accurate than comparable submachine guns of the era such as the Thompson and German MP40, but in harsh conditions it was highly prone to jamming.

Given these issues it is easy to see how it has ended up on many a “worst gun“ list.

Yet in the post-war years, the Reising did see service with some police departments across the country, suggesting that if it was cared for it would be fine even in an urban jungle—but when used in an actual jungle, it proved little better than a club.