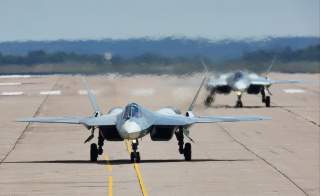 On December 24, 2019, a sleek-looking Su-57 stealth fighter designated Blue 01 took to the skies for an engine test flight from Dzemgi airport in eastern Russia.

But this eleventh aircraft, designated Blue 01, was the first production model Su-57 stealth fighter (codenamed the ‘Felon’ by NATO) to roll off the assembly line at Komsomolsk-on-Amur in Russia’s Far East.

But while testing the extremes of its performance envelope at 32,000 feet, Blue 01 began corkscrewing uncontrollably. As it fell to 26,000 feet, the pilot attempted to regain manual control, without success.

The Aviationist’s Tom Demerly reports that a Russian social media post allegedly by the Blue 01’s test pilot describes the tail stabilizers locking into extreme, contrary positions—and failing to respond to his input when he switched to manual control.

The pilot continued attempting to level the spinning jet until he was only 2,000 feet above the ground, before finally ejecting. Fortunately, he survived and was promptly rescued by an Mi-8 helicopter.

Meanwhile, Russia’s first production stealth fighter slammed into an unpopulated area and exploded—just a few days before it was due to be formerly delivered into Russian military service, meaning the cost of the loss has been incurred by the manufacturer and will be reimbursed by a hapless insurer.

This was the first total hull loss accident for the Su-57. Russia’s TASS news agency reported that the crash was due to a failure of the jet’s flight control systems, particularly as pertains to its tail control surfaces

Unlike old-school war birds that relied on mechanically actuated controls like wires or hydraulics, modern jet fighters use fly-by-wire flight control systems in which the pilot’s control stick movements are interpreted and electronically relayed by a computer. For highly maneuverable aircraft like the Su-57 or F-16 intentionally designed with aerodynamically unstable airframes, that computer is especially critical for artificially compensating for instability during routine maneuvers.

It’s not uncommon, however, for the fine-tuning of the fly by wire system to be a bit off in new aircraft, and for pilots to require time to learn the subtleties of the system’s behavior. Problems can arise both from mechanical parts failing to move as they are supposed to, or from the software governing how control surfaces are instructed move.

Early American F-16 fighters experienced many accidents until their fly-by-wire systems were fine tuned. And the infamous crashes of two Boeing 737 MAX airliners was linked to implementation of an automated flight control system to correct aerodynamic shortcomings which pilots were not adequately advised about.

A Russian aviation industry source told Izvestia that the Su-57’s flight control system should have had ‘multi-level’ protection against entering into a critical flight mode like an uncontrollable spin, including the ability to automatically reorient an Su-57 to level flight with the press of a single button. The same article invokes the possibility of problems in the engine and fuel system, or pilot error.

A military commission is set to investigate the exact cause of the accident.

According to Moscow Komsomolets the one bright side to the incident is that the pilot’s survival was ensured by the Su-57’s more advanced Zvezda K-36D-5 ‘smart’ ejection system, which reportedly can save the pilot even while the aircraft is flying inverted, locked in a spin, or experiencing a mishap at zero-altitude on the ground (a “zero-zero” ejection). Combined with the pilot’s VKK-17 pressurized suit, the Su-57’s ejection system supposedly remains effective as high as 66,000 feet and while moving at over twice the speed of sound.

All military aircraft types flown with any frequency will inevitably experience some accidents in their operational career. However, for the first production model to crash with only single or double-digit flight hours could impose major production delays if it ends up meaning systemic corrections are necessary to the production line to physical components, rather than just a software patch. Currently, two more Su-57s are due for delivery in 2020.

The United States’ new F-35 Lightning stealth jets have also experienced more than their fair share of production delays due to the discovery of bugs which manufacturer Lockheed has had to correct at great cost. Furthermore, a Marine F-35B crashed in 2018 and the first Japanese-built F-35A fatally crashed in 2019.

However, there were by then well over a hundred F-35s in service, and these had been flown many more flight hours.

And China’s Chengdu J-20 stealth fighter, around 28 of which are believed to be in service, has yet to experience a single crash at least known to the public.

It’s also worth keeping in mind that, like early “production” F-35s, the new Su-57s aren’t fully capable yet, as they currently use less powerful AL-41F idzeliye 117 turbofan engines as they await the integration of higher thrust izdeliye 30 turbofans due in the mid-2020s. An Su-57 so equipped began test flights in 2017.

On paper, the Su-57 makes an interesting contrast with F-35: though much less stealthy—particularly from the side or rear—the Sukhoi’s maximum speed is 50 percent greater and it’s significantly more maneuverable due to its vector thrust turbofans.

That tradeoff reflects the Russian jet has a tactical air-superiority emphasis over friendly or ‘no-mans’ land airspace, while the F-35 is a strike fighter designed to penetrate enemy defenses. But it also emerges from the U.S. Air Force’s belief that the advent of long-range missiles make stealth a dominating advantage, while Russian doctrine remains skeptical that beyond-visual range warfare will suffice by itself.

However, these theoretical differences have remained moot due to Moscow’s financial incapacity to procure more than twelve of the stealth fighters it had developed. The PAK FA program’s woes deepened in 2018 when India formally withdrew from a program to co-develop and procure an India-specific model dubbed the FGFA.

The Sukhoi stealth fighter’s prospects seemed to turn a corner in May 2019 when Putin revised the Su-57 production order to a more substantial seventy-six aircraft through 2028. Algeria, China and Turkey have also been offered an Su-57E export model, and India technically has left the door open to procuring the Su-57 once it completes development.

However, the timetable for both domestic and foreign prospects may be disrupted if it proves difficult and/or expensive to correct the apparent flight control system problems that led to Blue 01’s dramatic demise mere days before it was due to enter military service.