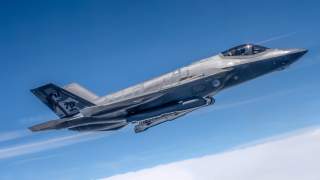 The U.S. military sees the Lockheed F-35 Lightning as representing a new paradigm of air warfare. The new tactical jet fighter controversially trades in some of the raw agility of preceding fourth-generation jet fighters in favor of capabilities emphasizing stealth, and reliance upon networked computers and powerful long-range sensors and missiles.

But the F-35 Lightning also represents a new business paradigm—one in which the jets are offered more and more as a service than as a physical product, with manufacturer Lockheed Martin retaining exclusive rights to modify much of the aircraft’s critical mission and ground-based software.

Earlier, while attempting to persuade Turkey not to purchase Russian surface-to-air missiles, the United States even reportedly threatened that it could cut off software support for any F-35 delivered to Turkey, rendering them virtually unusable.

Of course, maintenance, training, and spare parts contracts have for decades meant that jet fighters amounted to lucrative long-term revenue streams for their manufacturers. But the F-35 advances this paradigm dramatically in that Lockheed retain exclusive rights to modify its operating software, a fact which has not sat well not only with foreign importers but even the U.S. military.

Only Israel has received permission to install an overarching software shell “on top” of the jet’s computer in its customized F-35I fighters. Still, some will argue deeper privatization of jet fighter operations is unobjectionable if it delivers services more cheaply and efficiently than the military. But that may not be the case in this instance. The F-35’s ground-based ALIS logistical system, intended to streamline reporting and implement predictive maintenance, has for years remained buggy to the point of dysfunctionality—requiring constant manual inputs and workarounds when automated systems failed to do what they were supposed to do.

In a keynote address earlier this year, former Air Force Secretary Heather Wilson described ALIS as “a proprietary system so frustrating to use, maintainers said they were wasting 10-15 hours a week fighting with it . . . and looking for ways to bypass it to try to make F-35s mission capable.”

Worse, government reports have repeatedly identified ALIS as being vulnerable to hacking—which could have disastrous consequences given how dependent the jet is on its computer systems.

Indeed, the Pentagon has reportedly become so exasperated with ALIS’s continuing dysfunction it by early 2019 it had its in-house Kessel Run software team develop an alternative computer cloud called Mad Hatter to do the same job.

Lockheed, however, insists that it’s spending $170 million of its own money to fix ALIS.

Nonetheless, in mid-November, defense undersecretary Ellen Lord told Congress that “understanding where all the intellectual property is and making sure the government has access to what it has paid for is a key part of rearchitecting ALIS.”

In other words, the Defense Department’s desire to directly implement fixes of bugs in the F-35 is running afoul of Lockheed’s sweeping proprietary ownership of those digital support systems and the data they’re recording.

According to a Defense News article by David Larter and Joe Gould, F-35 program chief General David Fick also criticized how at times intellectual property disputes “that bordered on the ridiculous” were preventing the program from advancing.

“Everything from something as simple as U.S. government documents that get uploaded into a system and come back with Lockheed Martin proprietary markings on it . . . What we’re working to do is to figure out where are the places at which intellectual property assertions actually prevent us from doing the kind of work that we intend to do.”

Furthermore, Lord also testified that the Defense Department hired an independent consulting group to find ways to lower the F-35’s operating costs from around $35,000 per hour to the target $25,000, which would make it only slightly more expensive than a single-engine F-16 jet.

Reportedly the consultants discovered $3,000 in per-hour costs that they couldn’t account for. Lord said they were working with Lockheed to “understand” the “confusion.”

Not all the news is bad. The F-35 program’s formerly crippling shortage of spare parts has reportedly been alleviated with a buildup in inventory and presumably reforms to its inefficient depot logistic system. This has helped raise mission-capable rates from around 50 percent to roughly 70 percent—though still short of the target 80 percent.

The flyaway cost of the land-based F-35A model has also decreased to around $85 million, meaning those jets individually cost little more than advanced fourth-generation fighters if you don’t count-in operating expenses. And the more expensive F-35B jump-jet model is inspiring a renaissance in small-carrier fixed-wing aviation in countries like Japan and South Korea, and even the amphibious carriers of the U.S. Navy.

As the F-35 is currently set to be the most extensively manufactured warplane of the twenty-first century with projected sales of two to three thousand units—making it the most expensive weapons program in human history to date— more of the jet’s persistent defect may be laboriously smoothed away as multi-million dollar software patches introduce new capabilities and fix old problems.

But for now, the Pentagon and Lockheed appear to be facing off in a showdown over to what extent the U.S. military actually owns the jets it’s paying for.