The One Thing That Can Cripple an F-35 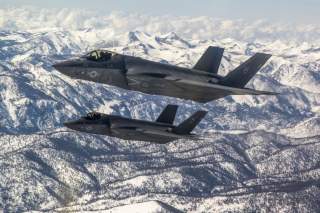 On April 30, 2019, two jets flying over the Hamrin Mountains in northern Iraq released GPS-guided JDAM bombs onto a tunnel complexed used by ISIS as an arms cache.

This otherwise routine strike was notable in one important respect: it was the first combat missions flown by the U.S. Air Force’s F-35A Lighting—a stealth jet the Pentagon has bet the bank on for its twenty-first-century air warfare strategy.

Earlier on April 15, the 419th Reserve and 388th Fighter Wings had deployed from Utah to Al Dhafra airbase in the United Arab Emirates, relieving an F-22 Raptor unit which had long been deployed to the region. The F-35 squadrons will likely fly additional combat missions during their deployment.

Israel had already deployed its own F-35A aircraft into combat by early 2018 (though it has disclosed only vague details about their activities), and that September, the U.S. Marine Corps deployed F-35B jump jets from the amphibious carrier USS Essex to strike Taliban positions.

As some commentators have pointed out, dropping a JDAM on insurgents lacking air defense weapons does not amount to a test of the F-35’s unique stealth capabilities, nor the revolutionary but controversial new paradigm of warfare it is meant to enable. In fact, the F-35s pictured in the strike flew with Luneberg radar deflectors designed to magnify their radar cross-section so as to deny regional observers a chance to study their actual profile.

The strike on Hamrin does prove, however, that the new design can perform routine combat tasks—and with something as complicated as a brand-new jet fighter design, that itself is an important milestone that can take years to work up to and is ideally not undertaken in a high-risk scenario.

In 2018, after years of cost overruns and delays, the F-35’s manufacturers also finally brought down the F-35A models “fly-away-cost” to the targeted $85 million per plane—a goal assisted by the F-35 project’s sheer economy of scale. Already around four-hundred F-35s of various models have been delivered to operators in a half-dozen different countries, with total production projected for three-thousand-three-hundred F-35s in the next few decades and additional orders anticipated from Poland, Singapore and other countries.

This means, that per plane the F-35 is little more expensive than premium 4.5-generation fighters like the Rafale, Typhoon or Su-35, which cost $65-80 million per plane.

Despite notable progress and the gradual ironing out of long-standing bugs, the stealth jet still faces a huge obstacle that currently is doing more to curb its effectiveness than any enemy fighter or surface-to-air missile system: a crippling shortage of spare parts which is leading to abysmal readiness rates.

“The F-35 supply chain does not have enough spare parts available to keep aircraft flying enough of the time necessary to meet warfighter requirements. According to prime contractor data, from May through November 2018, F-35 aircraft across the fleet were unable to fly 29.7 percent of the time due to spare parts shortages.”

The global F-35 fleet showed only 45-52 percent readiness—with only 34 percent rated Fully Mission Capable. For comparison, most Air Force units have readiness rates of 70 percent and, prior to stepping down, Secretary Mattis mandated a military-wide goal of 80 percent readiness.

F-35 parts are separated into four different types of packages: those assigned to local bases, packages for operational or wartime contingencies, “afloat” packages for carrier deployment, and more extensive packages for regional depots.

Reportedly there is a backlog for 4,300 F-35 parts—or “600 parts a month” according to Vice Admiral Matthew Winter in a recent congressional briefing—which is causing long delays for necessary parts to reach frontline units. Depots are not expected to make up the backlog until 2024.

As a result, operational squadrons are improvising fixes.

“From May through November 2018 F-35 squadrons cannibalized (that is, took) parts from other aircraft at rates that were more than six times greater than the services’ objective. These high rates of cannibalization mask even greater parts shortages, because personnel at F-35 squadrons are pulling parts off of other aircraft that are already unable to fly instead of waiting for new parts to be delivered through the supply chain.”

The spare-parts shortage has its roots in several factors related to the rush to declare “initial operational capability” and to deliver aircraft to the over half-dozen program participants as quickly as possible. This has come at the expense of furnishing the necessary parts to a network of regional supply depots.

As a program official told the GAO: “planning for this network is 3 to 4 years behind the need because the program was more focused on producing the aircraft than on sustainment” and they “did not realize the complexity of setting up the network.”

Early low-rate-of-production F-35s were delivered without basic capabilities and structural fixes planned for later implementation, meaning that these limited-capability early jets require unique spare parts, complicating the supply-chain. Reliability issues in these older aircraft leave only 30 percent of them rated as “Available” and just 5 percent as “Fully Mission Capable.”

The reports note: “there are at least 39 different part combinations across the fleet. Additionally, DOD’s training and operational squadrons are flying F-35 aircraft with three different blocks of mission software—2B, 3i, and 3F—with Block 3F software having the full warfighting capability.”

The confusion of parts manifested itself dramatically when Marine F-35s deployed to the carrier USS Wasp in 2018. Out of 882 “afloat package” parts received by the unit for the mission, 382 (43 percent) turned out to be incompatible. The parts included pilot harnesses, breath masks, antennas, valves, and panel assemblies.

To obtain the necessary spares, the embarked squadron undertook an apparently typical “solution”—raiding 187 parts from the Iwakuni F-35 base, leaving it with only 43 percent of the parts it needed.

Contractors also struggled to provide appropriate numbers of parts in need of more frequent replacement: “…quantity of parts within their parts packages were not fully reflective of the actual demands…based on updated information about the reliability of certain parts and how frequently they needed to be replaced.”

The report also highlights that the shortage is partially due to contractors taking an average of a half-year (188 days) to repair faulty F-35 parts, two to three times longer than expected.

Unfortunately, there’s a significant possibility the spare parts shortage will get worse before it gets better due to heightening tensions between Washington and Ankara.

Turkish companies manufacture roughly 7 percent of F-35 parts, and Turkey itself plans to purchase over 120 F-35s.

However, on April 1, 2019 the Pentagon ceased shipments of F-35 parts to Turkey and began planning contingencies for cutting Turkey out of the F-35 program entirely in the event that it presses forward with its plans to purchase Russian S-400 surface-to-air missiles systems, which among other issues, could be used to compromise the F-35’s stealth characteristics. Admiral Winter told a House sub-committee that removing Turkey would result in a two-three month shortfall in parts procurement, and cause F-35 production to fall behind by fifty to seventy-five aircraft over the next two years.