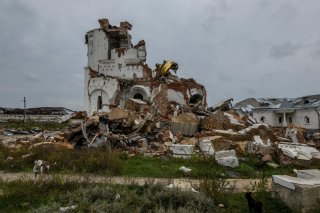 The brutal reality of the Russian invasion of Ukraine hit me hard when I visited the country with Zitto Kabwe at the invitation of The Brenthurst Foundation, an African think tank.

I had read about the war and seen the shocking pictures that the world has seen of civilian buildings blown to pieces by artillery as countless lives were lost in this unnecessary conflict.

But walking the streets of Ukrainian cities and seeing the devastation first-hand brought this assault on humanity, decency, and progress home. Nothing prepares you for the absolute destruction a missile can cause to a residential block or a school. Civilians who do not have the means to escape into temporary exile must simply wait in hope that they are not the next to be blown to pieces.

We visited Hostomel, Irpin, Kyiv, Lviv, and Borodyanka—a town smashed by the invaders.

I was particularly moved when a priest, inside a church in Bucha, showed us photographs of the victims of the murderous spree undertaken by Russian soldiers against civilians in what has become the war’s most shameful chapter so far. This humble man whose church has been emptied by machine guns and missiles described to us the massacre by the Russian military which culminated in the graves in the church’s backyard. Such images will live with me forever.

What is remarkable, however, is how a people subject to such a vicious assault are standing up and fighting back. Dotted around were the rusting hulks of destroyed tanks, now standing as monuments to the Ukrainian fighting spirit.

The spirit of freedom is not easily crushed. Ukraine’s young men are literally sacrificing their lives in defense of their country and what it stands for.

Ukraine’s transition from a Soviet satellite state to a leading European democracy was an inspiration to me and countless other Africans who live under regimes that proudly associate themselves with autocracy, militarism, and aggression. Their transition to fighters for freedom is equally inspirational.

What is particularly moving is how that spirit of determined independence, the will to defend democracy and sovereignty, continue to survive an all-out Russian assault.

Uganda is among those African countries where to challenge the rule of the incumbent is to risk detention and death. In the January 2021 election, hundreds were abducted, detained, and murdered by the security forces. The switching off of the internet the day before the election, said Amnesty International, was “clearly intended to silence the few accredited election observers, opposition politicians, human rights defenders, activists, journalists, and bloggers who are monitoring the elections.”

I was arrested and detained several times in the run-up to the election, and placed under house arrest as the results were released. We continue to suffer at the hands of the security agencies, while President Yoweri Museveni’s son and heir-elect Gen. Muhoozi Kainerugaba openly tweets his support and admiration for the Russian position.

It is clear why Africa’s autocrats favor the Russian position; they don’t want to be held accountable, and they believe in the rule of the jungle not the rule of law. Ukraine’s resistance is as much a challenge to their view of the world as it is an example to Africa’s democrats. We take heart from their resolve and ask donors to adopt the same principles behind their support of Kyiv (and isolation of Vladimir Putin) in their dealings with Africa’s democrats in their struggle against authoritarianism.

We call on donors to avoid replicating in Africa the type of supposedly “strategic” but amoral reasoning that got Europe ensnared with Putin’s Russia.

We know that the path to democracy is never going to be easy. Just as Ukraine’s brand of nationalism and the strength of its struggle threaten the Russian view of the world, our vision of democracy, human rights, and equal opportunity challenges the oligarchs of Uganda.

Like the Ukrainians, we will not be easily crushed.

While in Ukraine, I was moved to do what I do best—express myself through music. I recorded music with some incredible local artists. Sofia Grabovestska has a voice like an angel and with the local band, String Mockingbird, we recorded a new version of the song “Alone But Together” with the help of Greg Mills, who helped write the lyrics, and the South African musician, Robin Auld.

Singing the song’s key refrain—“Don’t be a victim/Be the solution”—with Sofia in a Lviv studio was an incredible experience for me. It was a moment when people separated by continents, by conflicting histories, by different cultures, came together to put humanity first.

Nobody said fighting for freedom would be easy and the Ukrainians know this better than anyone. If they can hold their ground and even beat back a much-vaunted invader like Russia, there is hope for all who want to transform their countries from backward autocracies to modern, functional democracies which build a better life for all citizens. Ukraine’s struggle is Africa’s struggle.

Image: A destroyed church is seen in the village of Dolyna, amid Russia's attack on Ukraine, in Donetsk region, Ukraine October 2, 2022. Reuters.