Why the U.S. Army Loves Lasers (And No, Not To Shoot At People) 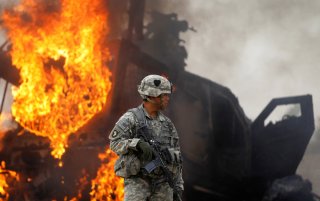 Lasers can already incinerate drones, destroy enemy aircraft and possibly even melt incoming anti-ship missiles, but the Army Research Office is fast progressing with new research enabling lasers to transmit data at the speed of light.

While early on, it is potentially a huge breakthrough, as promising new experiments are showing that laser communications can instantly network robots, drones, sensors, weapons and platforms. The work, now being done by the University of Pennsylvania and Duke University, is based upon the science of Photonics, which an Army Research Office essay says “has the potential to transform all manners of electronic devices by storing and transmitting information in the form of light, rather than electricity.”

There are still many challenges to resolve, the Army Research Office paper explains, yet the breakthrough introduces great promise, as lasers could transmit sensitive data across multiple nodes at the speed of light, exponentially faster and potentially more secure than radio frequency communications.

“In order to preserve the information manipulated by a photonic device, its lasers must be exceptionally stable and coherent. So-called single-mode lasers eliminate noisy variations within their beams and improve their coherence, but as a result, are dimmer and less powerful than lasers that contain multiple simultaneous modes,” the Army Research Office paper says.

Researchers have been working on two-dimensional arrays of microlasers that achieve what scientists called greater “power density,” yet the beams still need to be stabilized.

Dr. James Joseph, the program manager for the Army Research Office, explained in the paper that the office, which funds Army-oriented cutting-edge research, is an element of the U.S. Army Combat Capabilities Development Command, which falls under the umbrella of Army Futures Command.

“One seemingly straightforward method to achieve a high-power, single-mode laser is to couple multiple identical single-mode lasers together to form a laser array,” Dr. Liang Feng, associate professor in the departments of Materials Science and Engineering and Electrical and Systems Engineering at the University of Pennsylvania, said according to the research paper.

Drone vehicles, robots and advanced sensors could all benefit from these types of innovations, as targeting or terrain-mapping data could be quickly sent to human decisionmakers through these focused, high power-density lasers able to share between an interconnected series of nodes in a “meshed” network.

The other potentially significant advantage would likely be in the area of the range, meaning greatly dispersed combat nodes miles away could share time-sensitive data with virtually no latency, something bringing critical implications when it comes to reducing sensor-to-shooter time. Lasers, being light energy instead of electricity, are much less likely to be hacked, jammed or interrupted by cyber or electronic warfare attacks. Perhaps a high-altitude surveillance plane detects enemy movement in a densely populated area about to come into direct contact with infantry and then instantly transmits images, data points and target details to ground forces in position to attack? Maybe multiple beams could be sent at one time, expanding force awareness of target locations, maneuver strategies and methods of attack.