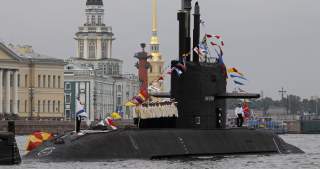 The Pentagon is reiterating that while Russia’s surface naval forces are not a major threat to the United States Navy, the Kremlin’s undersea forces represent a serious challenge not only for Washington but for America’s NATO allies as well. Russia’s undersea forces can not only challenge allied seapower, but can strike across Europe and even the continental United States with submarine-launched cruise missiles.

“You know, Russia is not 10 feet tall, but they do have capabilities that keep me vigilant, concerned,” Adm. James G. Foggo III, commander, U.S. Naval Forces Europe, told reporters on Oct. 5. “One of them is in the undersea domain.”

Foggo noted that Russian surface forces and naval aviation capabilities are not remotely comparable to that of the United States. “For example, if you were to look at the surface navy versus the submarine force, you wanted to compare apples to apples and aircraft carrier to an aircraft carrier, Kuznetsov does not even come close to a Nimitz-class carrier or a Ford-class carrier,” Foggo said. “So in the maritime, in the surface Navy, they're building a lot of small ships, a lot of new construction, small classes of ships, but they do not have a robust capital ship capability and certainly multiple aircraft carriers like we have to be able to operate globally. They're more regionally focused in Europe and Africa, and it's certainly from their bases in the Pacific.”

Foggo cited several new classes of Russian submarines including the Project 955 Borei nuclear-powered ballistic missile submarine (which is sometimes referred to as the Dolgorukiy-class), the Project 885 Yasen-M or Severodvinsk-class nuclear-powered guided missile submarine and the Project 636.3 Varshavyanka or Improved Kilo-class diesel-electric attack submarine by name as potential threats. Foggo noted that those submarines, particularly the Yasen-class and the Varshavyanka, can be armed with long-range Kalibr cruise missiles that can hit any target in Europe with precision.

“They're firing the Kalibr missile—very capable missile. It has a range, which, if launched from any of the seas around Europe—Europe's really a peninsula; Caspian, Baltic, Arctic, North Atlantic, Mediterranean or Black Sea—could range any one of the capitals of Europe.”

While Foggo does not necessarily believe that the Russians would launch an unprovoked attack with those weapons, it is a concern for Washington and America’s NATO partners. “That's a concern to me, and it's a concern to my NATO partners and friends,” Foggo said. “So we should know where they are at all times. Do I think that they would do something like that? No, I think they'd be foolish to do something like that. But, nevertheless, we should have that situational awareness. So it's in our best interest to have a better submarine force, and I believe that we do.”

“We have to continue to put a capital effort into the development of our technologies and antisubmarine warfare,” Foggo said. “This is not just submarines, it's maritime patrol aircraft, it's sensors of all types, and it's the surface Navy with their multifunction towed arrays, and the training and the professionalism that goes along with it, for us to have the knowledge and the awareness of where the adversaries operate.”