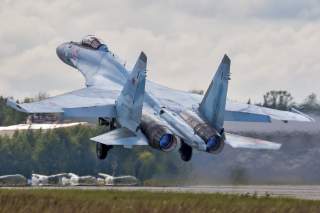 Key point: Turkey is looking to expand its military procurements to new partners.

Doubling down on what The National Interest previously described as the Russian President’s increasingly proactive role in advertising the Su-57 to prospective buyers, Putin treated Erdogan to an ice cream cone after the two mounted an elevated platform to inspect the onboard electronics of a Su-57E-- the export variant of the Su-57. Putin was accompanied by a cadre of United Aircraft Corporation (UAC) officials, on hand to continue the trade negotiations with Erdogan’s delegation.

Erdogan was shown a flight routine performed by three different Russian fighters-- not coincidentally, all of which are currently being considered by the Turkish defense industry as prospective import options: a Su-34 tactical strike fighter, Su-35 air superiority fighter, and four Su-57’s.

Tailoring their pitch to Turkey’s fifth-generation aircraft procurement priorities, the presentation stressed the Su-57’s stealth capabilities; particularly, that it reduces observability by housing the bulk of its weapons payload in internal storage bays.

When queried by Erdogan if the Su-57 is for sale, a smiling Putin responded: “yes, you can buy it.”

Putin’s sense of immediacy may appear somewhat premature given that the Su-57 has barely even entered serial production, with the first serial unit scheduled for delivery later this year. However, it is crucial to understand that Russia is playing a long-term developmental game with the Su-57; signing a contract with Ankara would not only provide funds that can then be reinvested into Russia’s domestic Su-57 supply chain, but an early contract with a major arms trade player such as Turkey would give the Su-57 a stamp of import approval in difficult, ongoing negotiations with India and China. It remains to be seen if the Su-57E can be mass-produced in sufficient quantities to satisfy Turkey’s import needs and early 2020’s delivery timeframe.

Nevertheless, the Kremlin and the Russian defense industry are not hinging their all of their fighter export ambitions on the Su-57 alone.

In a joint press conference held later that day, Putin offered the Su-35 as an alternative to the Su-57: “We talked about cooperation on the Su-35 and even on the possible work on the new Su-57 plane. We have plenty of options and we have demonstrated new weapon systems and new electronic warfare complexes.” There are also some preliminary indications that Turkey is considering the Su-34, which is due to receive a modernization package over the coming years.

In keeping with the Turkish policy line over the past several months, Erdogan indicated a general interest in Russian military aircraft while playing his cards close to his vest on any specific procurement plans: "The joint production [of S-400 air defense systems] is a major step in relations with Russia. There were a lot of rumors on this issue but we didn’t pay the slightest attention to them… We want to spread our solidarity in this area to all the other spheres of the defense industry. This may also apply to military planes.”

The Kremlin’s continued courting of Ankara at MAKS 2019 comes at a time when Erdogan’s government is searching for an alternative military aircraft procurement path after being ejected from the F-35 program earlier this summer for purchasing Russia’s S-400 missile defense system. The US Defense Department, which revoked Turkey’s F-35 partner status earlier this summer, remains open to reversing its decision on the increasingly unlikely condition that Turkey gets “rid of the S-400 program and completely out of the country.”

Mark Episkopos is a frequent contributor to The National Interest and serves as a research assistant at the Center for the National Interest. Mark is also a Ph.D. student in History at American University. This article originally appeared earlier this month.