Worried About World War III? These 5 Places Are Where It Could Start. 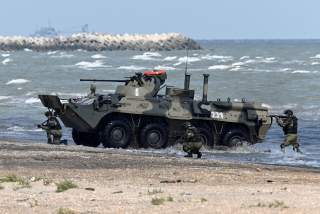 Key point: The world has many hotspots that could result into global warfare.

The world has avoided war between major power war since 1945, even if the United States and the Soviet Union came quite close on several occasions during the Cold War. In the first two decades following the fall of the Berlin Wall, great power war seemed virtually unimaginable. Today, with China’s power still increasing and Russia’s rejection of the international order apparently complete, great power conflict is back on the menu.

In what is slowly becoming a tradition here at TNI (see my predictions for 2017 and 2018) what are the most dangerous flashpoints to watch in 2019?

The South China Sea (SCS) has become wrapped into the growing trade clash between the United States and China. For now, that conflict is playing out in exchanges of heated rhetoric, tariffs and various other trade sanctions. The United States and Canada recently escalated the conflict by arresting an executive of the Chinese technology firm Huawei, which led to counter-steps by China against Canadian citizens and U.S. firms.

As of yet the United States and China have not drawn a tight connection between the trade war and the ongoing disputes in the SCS. However, as relations between the two countries deteriorate, one or the other might decide to escalate beyond dollars, words and legal filings. Indeed, if China and the United States conclude that their trade relationship (which has provided the foundation of global economic growth for the last two decades) is at substantial risk, and similarly conclude that further conflict is inevitable, then either might decide to “take off the gloves” in the SCS.

The world remembered Ukraine when an incident at the passage into the Sea of Azov resulted in shots fired, a ramming and the detention of two Ukrainian patrol vessels. Whether instigated by Russia or Ukraine (and both governments appear to have played some part), the interception reignited tensions in a crisis that has smoldered for the last couple of years. The declaration of martial law by the Ukrainian government suggested the possibility of unrest in Ukraine.

To be sure, Russia seems to lack any interest in disrupting the status quo ahead of the Ukrainian elections, while the Ukrainian government continues to lack the capacity to consequentially change facts on the ground. The upcoming elections will probably not change the basic equation, but could introduce uncertainty. Given the continuing tensions between Russia and the United States, even a small shift could threaten the uneasy balance that has held for the last several years, potentially throwing Eastern Europe into chaos.

The perpetual political and military crisis in the Middle East has settled into an uneasy tedium. Economic pressure on Iran continues to increase, as the United States take ever more aggressive steps to curtail trade. The Saudi war on Yemen shows no signs of abating, and while the Syrian Civil War has dialed down to a low, slow burn, both the United States and Russia remain committed to their partners and proxies.

But like any slow burn, the conflict could reignite. Political turmoil in Iran could destabilize the region, either pushing Iran into aggressive behavior or making the Islamic Republic a tempting target for its enemies. The tensions between Kurds, Turks, Syrians and Iraqis could break into open conflict at any time. Finally, the mercurial leader of Saudi Arabia has demonstrated time and again a proclivity for risk acceptance, even as whispers about the stability of the Kingdom grow louder. Given the strategic importance of the region, any instability could lead to conflict between the United States, Russia or even China.

It is undoubtedly correct that tensions on the Korean Peninsula have declined a great deal in the last year, as Kim Jong-un has demonstrated a degree of forbearance regarding nuclear and ballistic missile tests, and President Donald Trump has toned down his rhetoric about confronting North Korea. And indeed, the prospects of an enduring peace are surely brighter now than at any time since the mid-1990s.

And yet serious pitfalls remain. The president has staked his prestige on an agreement with North Korea, yet by most serious accounts North Korea has not suspended, or even slowed, its production of nuclear weapons and ballistic missiles. President Trump’s advisors are aware of and unhappy about this fundamental contradiction. If Trump sours on Kim, if elements of the administration try to spoil any agreement, or if Kim sours on Trump, the relationship between Washington and Pyongyang could go sour very quickly. Moreover, neither China nor Japan are fully on board with reconciliation between South Korea and a fully nuclear North Korea, although their reasons for skepticism are quite different. All told, the situation in Korea remains much more dangerous than the most optimistic assessments would suggest.

As a colonel at the U.S. Army War College memorably phrased the problem, “the United States has wrongly predicted every conflict since the Korean War. Why should we expect World War III will be any different?” Great powers tend to devote diplomatic, military, and political resources to what they regard as the most serious conflicts on their plates. Less critical conflicts don’t receive as much attention, meaning that they can sometimes grow into serious confrontations before anyone quite notices what’s going on. Disruptive conflict could emerge in the Baltics, in Azerbaijan, in Kashmir or even in Venezuela, but the United States, China and Russia only have so much focus. If World War III comes about, it may well come from a completely unexpected direction.

Is the world more dangerous today than it was a year ago? Perhaps not, although the decay of the relationship between China and the United States portends ill for the future. The flashpoints may change over time, but the fundamental foundations of conflict—the decay of U.S. military hegemony and of the global international order that has accompanied it—mean that the near future will likely become more hazardous than the recent past.

Robert Farley, a frequent contributor to TNI, is a Visiting Professor at the United States Army War College. The views expressed are those of the author and do not necessarily reflect the official policy or position of the Department of the Army, Department of Defense, or the U.S. Government. This first appeared at the beginning of the year.