Worth the Wait: Why America’s Rivals Will Fear the B-21 Bomber 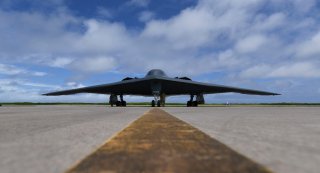 The highly secretive and much anticipated new U.S. Air Force B-21 stealth bomber will blast onto the scene with a formal rollout in December of this year, marking a major milestone for the future of war.

What exactly can be said about the B-21 bomber? The answer is “nothing.” The program has been largely secret or completely “black” since its inception, for understandable reasons. Given the importance and sensitivity of the missions it will need to perform, the Air Force certainly does not want any adversary to learn specifics related to its design or technology. That being said, senior Air Force leaders do say there are ongoing deliberations with Congress regarding what, if anything, can be made unclassified to enable Congressional oversight and budgeting or production decisions. The Pentagon is now exploring if it will be possible to open up the program to Congress without compromising security.

Regardless, one thing is frequently discussed in a general sense: the fact that the B-21 Raider likely contains paradigm-changing stealth technology and computing systems. As far back as seven years ago, Lt. Gen. Arnold Bunch, the former Military Deputy to the Assistant Secretary of the Air Force for Acquisition, Technology, and Logistics, told the National Interest that the B-21 bomber will be able to hold “any target” at risk “anywhere” in the world. Since that time, senior Air Force leaders have echoed a similar level of confidence in the platform's technology and anticipated future performance. The service has also heavily praised B-21 producer and designer Northrop Grumman for pioneering cutting-edge technologies and its ability to remain on cost and schedule with the new bomber.

Interestingly, Northrop Grumman did issue a general statement about ongoing work and procedural components related to preparing the stealth bomber for its rollout and first flight in 2023.

“As the B-21 continues its ground test phase, the team will power up the aircraft, test its subsystems, and apply coatings and paint. The next steps will include carrying out engine runs as well as low-speed and high-speed taxi tests, and then on to first flight,” a Northrop Grumman statement said.

The Northrop Grumman statement also specified that developers made an impactful shift to the cloud with the B-21’s ground systems. “This demonstration included the development, deployment and test of a suite of B-21 data, including the B-21 digital twin, that will support B-21 operations and sustainment. This successful test proved the ground systems footprint can be significantly reduced at main operating bases and in deployment packages,” Northrop’s statement said.

In recent years, the new stealth bomber has been going through design assessments, tests, and a series of preparations at Edwards Air Force Base in California as part of the Air Force’s effort to ensure that the aircraft's first flight is successful.