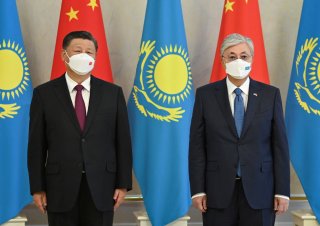 Chinese president Xi Jinping arrived in Kazakhstan on Wednesday, marking the first leg of his tour of Central Asia ahead of a summit meeting in neighboring Uzbekistan later in the week.

The Chinese leader was met by Kazakh president Kassym-Jomart Tokayev and an honor guard at Nursultan Nazarbayev International Airport in Nur-Sultan (also known as Astana), the country’s capital city. In a statement issued before the meeting, Tokayev’s office claimed that the two leaders would discuss economic ties and bilateral cooperation in the field of energy. China is Kazakhstan’s largest trading partner, and the Central Asian country has been a linchpin in Beijing’s Belt and Road Initiative international infrastructure program. Chinese loans and investments have modernized the country’s roads and railways, although this investment program has led to quiet tensions with Russia, which has traditionally regarded the former Soviet republics of Central Asia as part of its sphere of influence.

Xi is present in Nur-Sultan at the same time as Pope Francis, who visited the country for an interfaith conference. The two leaders will not meet, although the pontiff has expressed his willingness to travel to China in the future.

Following his visit to Kazakhstan, Xi is slated to fly to Samarkand, Uzbekistan’s oldest and second-largest city, for the annual meeting of the eight-nation Shanghai Cooperation Organization (SCO) alongside Russia, India, Kazakhstan, Kyrgyzstan, Pakistan, Tajikistan, and Uzbekistan. An observer delegation from Iran will also attend the summit, as well as several officials from the Taliban-led government of Afghanistan.

Although the main topic of discussion at the summit is likely to be China’s proposed Global Security Initiative—a loosely-defined military alliance intended to counteract the power of the Quad nations in the Indo-Pacific region—the bloc’s leaders are also likely to discuss Russia’s ongoing invasion of Ukraine, which saw a massive setback last week after a successful Ukrainian offensive in the northeastern Kharkiv oblast. Xi and Russian leader Vladimir Putin are expected to meet on the sidelines of the summit for private consultations.

The trip to Central Asia is Xi’s first trip abroad since the onset of the Covid-19 pandemic in Wuhan, China in December 2019. After his return to Beijing, the Chinese leader is slated to attend the Chinese Communist Party’s Twentieth Party Congress in October, where he is expected to seek re-election to a third term as premier—an act that would break with China’s two-term tradition established after the death of Mao Zedong.