Yes, Ukraine Could Drag America into a World War with Russia 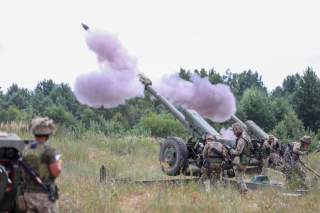 Despite numerous violations, the cease-fire in Ukraine's Donbass region is largely holding. For very different reasons, President Petro Poroshenko of Ukraine and President Vladimir Putin of Russia have come to lead the parties of peace in their respective capitals. Economic issues clearly top the agenda in both Ukraine and Russia.

Yet, the cease-fire remains very brittle. The Donetsk airport and the city of Donetsk itself have seen some heavy fighting, with many civilian casualties. The parties of war on both sides of the front line have not given up their ambitious goals. Should the cease-fire be allowed to break down completely, the danger of a big war in Ukraine will immediately reappear.

This scenario must be absolutely barred, as it risks escalation to a full-scale military confrontation between Russia and NATO. However, mere avoidance of war is not good enough. The perilous political dynamics in Eastern Europe need to be reversed. To do that, the following immediate steps are in order.

1. Deploying OSCE military observers, in sufficient numbers and appropriately armed, along the lines of engagement in Donbass, starting with the Donetsk area, and along the Ukraine-Russia border adjacent to it;

2. Reaching an agreement between Ukraine and Russia, with the European Union's active participation, on the gas price for Ukraine, and on the associated issues, such as a schedule for the gas debt repayment, which would allow Russian gas deliveries to Ukraine this coming winter;

3. Starting a political dialogue, mediated by the OSCE, between the representatives of Ukraine and of the people of the Donetsk and Lugansk regions, with a view, initially, to restoring contacts and communication between them, and eventually to agreeing on a formula for reintegration.

Ironically, but also tragically, given the number of people killed and the extent of the damage sustained, the main players in the Ukraine crisis have already achieved their most important objectives and can now well agree on a new provisional status quo.

Ukraine is more of a nation today than it has ever been since gaining independence. Its westward orientation is not in question anymore, even if it will be a very long time before Ukraine can join the European Union.

Crimea is in Russia's hands, and the very fact of Ukraine's demand to return it will securely prevent Kiev from achieving NATO membership. Not so much the dispute over territory, but the real danger of a military conflict with Moscow will keep the United States and its allies (above all Germany) from accepting Ukraine as a formal ally.

The degree of national unity achieved within most of Ukraine since the beginning of the war in the east makes the Russian language issue less topical in Ukrainian politics. In the future, linguistic differences in Ukraine will not necessarily constitute a political divide. Political processes in Ukraine are also pointing toward the emergence of a pluralistic, less-centralized polity.

Thus, a Ukraine that is leaning toward the West, but staying formally neutral between NATO and Russia; widely populated with Russian speakers, but often critical about Moscow's policies; and decentralized without the danger of secession is emerging as a new state of balance. The conflict in Donbass will take a long time to resolve, but it will be peripheral to the fate of Ukraine as a whole. As for Crimea, international agreement on its status will take a very long time and will reflect the future status of Russia's relations with the West.

Meanwhile, Russia and the European Union have a good reason to cooperate on Ukraine, each driven by its own motives. Europe, reluctantly, will have to bail Ukraine out, but Ukraine's continuing access to the Russian market will help. Russia is also pouring money into Crimea, which it sees as a jewel in its crown, and will have, for now, to chip in for Donbass as well. A modicum of Euro-Russian cooperation on Ukraine will let the United States focus on the issues more relevant to its own security and economic opportunity. Almost seventy years after the end of World War II, the incredible sight of German soldiers keeping the peace between Ukrainians and Russians may usher in a kind of stability to Europe's east.

Dmitri Trenin is the Director of the Carnegie Moscow Center. Follow him on Twitter: @DmitriTrenin. This first appeared in October 2014.