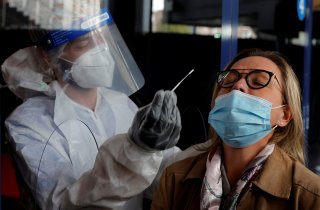 An elderly woman from the Netherlands is believed to be the first known person to die after contracting the coronavirus twice, according to a study accepted for publication in the journal Clinical Infectious Disease.

The eighty-nine-year-old woman suffered from Waldenström’s macroglobulinemia, a rare type of bone-marrow cancer, and her immune system was compromised due to the B-cell-depleting therapy that she was receiving, the researchers at Maastricht University Medical Center in the Netherlands wrote in the study.

The patient was initially hospitalized earlier in the year with a severe cough and fever. She later tested positive for the coronavirus. She was able to leave the hospital five days later.

However, nearly two months after the first infection, the woman developed a fever and cough and had difficulty breathing. She once again tested positive for the virus, and two weeks later, she died.

According to the researchers, the patient contracted two different strains of the virus, and it is unclear if she ever possessed any immunity after each infection.

The study added that “it is likely that the second episode was a reinfection rather than prolonged shedding.”

In the United States, another recent study that was published in The Lancet Infectious Diseases examined the case of a twenty-five-year-old man in Nevada who was infected by different coronavirus strands on two occasions. It was also unclear if he ever had immunity to the contagion.

The researchers, though, noted that the second infection “was symptomatically more severe than the first.”

“These findings suggest that the patient was infected by SARS-CoV-2 on two separate occasions by a genetically distinct virus,” the study wrote. “Thus, previous exposure to SARS-CoV-2 might not guarantee total immunity in all cases.”

In August, researchers in Hong Kong reported what appeared to be the world’s first confirmed case of coronavirus reinfection. The thirty-three-year-old man first contracted the virus in late March and then, four and a half months later, seemingly was infected again while traveling in Europe.

Researchers at the University of Hong Kong were able to sequence the virus from the patient’s two infections and found that they did not match—indicating that the second infection was not related to the first.

Despite being roughly nine months into the global pandemic, there is still much that is unknown regarding how long immunity to the novel coronavirus lasts. Research on other members of the coronavirus family of viruses suggests immunity has the potential to last for several months to three years.