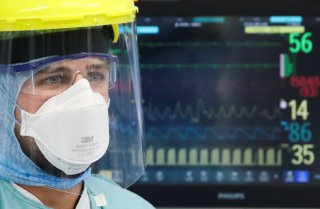 Even if a viable vaccine becomes available to much of the world’s population, the novel coronavirus will likely become as “endemic” as the seasonal flu virus, according to Patrick Vallance, the United Kingdom’s chief scientific advisor.

“The notion of eliminating COVID from anywhere is not right, because it will come back,” he told the National Security Strategy Committee in London on Monday. “We can’t be certain, but I think it’s unlikely we will end up with a truly sterilizing vaccine, (that is) something that completely stops infection, and it’s likely this disease will circulate and be endemic, that’s my best assessment.”

He added: “Clearly as management becomes better, as you get vaccination which would decrease the chance of infection and the severity of disease . . . this then starts to look more like annual flu than anything else, and that may be the direction we end up going.”

Vallance noted that a highly effective vaccine, which often takes a decade to develop from scratch, has been able to eradicate only one human disease—and that was smallpox.

“We’re now in the extraordinary situation where there are at least eight vaccines which are in quite large clinical studies around the world. . . . We will know over the next few months whether we have any vaccines that really do protect and how long they protect for,” he said.

Vallance added that he doesn’t believe a viable vaccine would be widely available to the public until at least spring.

In the United States, White House coronavirus advisor Dr. Anthony Fauci in July echoed similar sentiments, saying that the novel coronavirus likely won’t ever be eradicated. It is, however, possible for world leaders and public-health officials to work together to bring the virus down to “low levels.”

“I think with a combination of good public health measures, a degree of global herd immunity and a good vaccine, which I do hope and feel cautiously optimistic that we will get, I think when we put all three of those together, we will get control of this—whether it’s this year or next year. I’m not certain,” Fauci, the director of the National Institute of Allergy and Infectious Diseases, said during a webinar with the TB Alliance.

He later added: “I don’t really see us eradicating it.”

Fauci highlighted the fact that the coronavirus is extremely efficient in transmitting from human to human and can produce a wide range of symptoms in those who are infected.

“I have never seen infection in which you have such a broad range—literally no symptoms at all in a substantial proportion of the population to some who get ill with minor symptoms to some who get ill enough to be in bed for weeks,” he said. “Others get hospitalized, require oxygen, intensive care, ventilation, and death. The involvement with the same pathogen is very unique.”

Now more than nine months into the pandemic, there are roughly 40.5 million confirmed cases of coronavirus worldwide, including at least 1.12 million related deaths, according to the latest data from Johns Hopkins University.