The Delta Surge Won’t Lead to a Fourth Stimulus Check 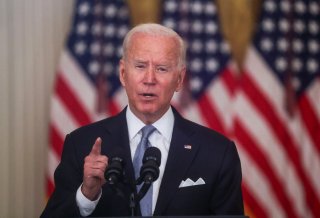 Panic over the highly transmissible COVID-19 “Delta variant” has led to a renewed interest in a fourth stimulus check.

New cases of the virus averaged roughly 120,000 per day across the United States last week. This rate of infection, a substantial increase from the low rates in the spring and early summer, is on par with the numbers from early February, prior to President Joe Biden’s approval of the American Rescue Plan Act, which sent out $1,400 stimulus checks to nearly all adult Americans.

The purpose of the stimulus payment was to “stimulate” the U.S. economy by providing families with money to spend, maintaining a cash flow, and preventing the economy from freezing up. These payments are typically reserved for dire economic circumstances—for instance, in March 2020, when millions of workers were furloughed overnight. President Donald Trump’s $1,200 stimulus checks have been widely (though not universally) hailed as effective in combating poverty and restoring market activity.

Although the worst days of the pandemic have receded, and many Americans are returning to work, some stimulus advocates have continued pushing the payments. A Change.org petition calling for monthly $2,000 checks, though roundly criticized from some corners for its implausibility, has now crossed 2.8 million signatures—roughly 2 percent of the total number of Americans who voted in the 2020 election.

In Congress, Representative Ilhan Omar (D-MN), who had previously advocated for the monthly $2,000 measure, introduced legislation in the House of Representatives that would provide a $1,200 payment to most American adults and a further $600 to children. Separately, more than eighty members of Congress–roughly sixty representatives and twenty senators, all of them Democrats–have publicly supported a fourth stimulus check.

However, a fourth stimulus check is exceptionally unlikely to be passed. While the Delta variant has returned the United States to mask-wearing and social distancing, the economy is still projected to grow by as much as six percent in 2021, drawing the need for stimulus payments into question.

Moreover, Congress has shown other priorities. The $1 trillion infrastructure bill crafted in a bipartisan compromise recently passed the Senate; it is headed to the House, where it will be approved by the Democratic majority, and then to Biden for his signature. This bill does not include any further stimulus payments.

Senate Democrats are also working to craft a $3.5 trillion “reconciliation” bill that could be passed without the option of a Republican filibuster. This bill contains spending for a number of Democratic priorities but does not include further stimulus checks.