Genomic Study Has Discovered Which Animals Can Get Coronavirus 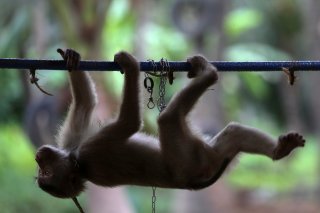 There already have been plenty of reports detailing that dogs and cats can be infected by the novel coronavirus.

Chimpanzees and gorillas? Not a huge surprise that they’re susceptible. But what about giant anteaters, bottlenose dolphins, sheep, minks, and Siberian tigers?

It’s an emphatic yes to those animals, too, according to a team of researchers at the University of California, Davis.

The new study, which was published in the Proceedings of the National Academy of Sciences, has found that any animal that has the same enzyme that SARS-CoV-2 uses to infect human beings is also at risk of infection from coronavirus.

That particular enzyme is called ACE2, which can be found in a number of different cells in the human body, including the epithelial cells on the lungs, nose, and mouth. When infecting humans, the coronavirus binds itself to twenty-five amino acids of the ACE2 enzyme.

“We identified a large number of mammals that can potentially be infected by SARS-CoV-2 via their ACE2 proteins,” the study’s authors wrote.

“This can assist the identification of intermediate hosts for SARS-CoV-2 and hence reduce the opportunity for a future outbreak of COVID-19.”

In other words, the animals that have the same twenty-five amino acids in those ACE2 enzymes have the highest risk of contracting the virus.

In addition to discovering some surprises as to which animals were susceptible to coronavirus, the researchers are hoping that their efforts might help protect vulnerable endangered species—especially great apes, which were shown to be nearly as susceptible as humans, according to the study.

“Among the species we found with the highest risk for SARS-CoV-2 infection are wildlife and endangered species,” the study stated.

“These species represent an opportunity for spillover of SARS-CoV-2 from humans to other susceptible animals.”

But the Centers for Disease Control and Prevention has stated that owners of pets do not have to worry about the potential for transmission.

“The virus that causes COVID-19 spreads mostly from person to person through respiratory droplets from coughing, sneezing, and talking,” the CDC states.

“Recent studies indicate that people who are infected but do not have symptoms likely also play a role in the spread of COVID-19. At this time, there is no evidence that companion animals, including pets, can spread COVID-19 to people or that they might be a source of infection in the United States.”

The agency is recommending that owners prevent their pets from interacting with people or animals outside their homes. If they are outside, the pets should maintain at least a six-foot distance.

If a pet owner tests positive for the virus or believes he or she is sick, all contact with the animal should be immediately cut off, the agency added.