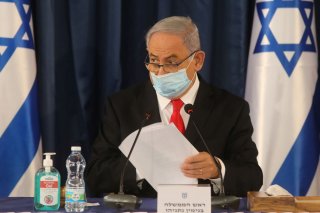 A historic agreement announced on July 2 will see Israel’s leading aerospace and defense company Israel Aerospace Industries and Rafael Advanced Defense Systems develop breakthrough technology with Group42 in the United Arab Emirates. This is the first of its kind deal between Israeli companies and those in the Gulf state and represents more than just an agreement related to the pandemic. It is part of growing ties between Israel and the Gulf, particularly part of an exchange of messages with the UAE.

Israel and the UAE were rumored to be working more closely in June and a deal was set to be announced on June 25. Two humanitarian aid flights have arrived from the UAE to Israel in recent months. The June 9 flight had the emblem of Etihad Airways. The UAE’s ambassador to the U.S. Yousef al-Otaiba also wrote an op-ed in Israel’s leading daily Yediot Ahronot on June 11. This has helped pave the way for the current agreement.

Israel’s defense industry has confronted coronavirus crisis by harnessing the technology and expertise of the military and Ministry of Defense. For instance, Israel used techniques usually used to track terrorists to try to trace the virus, a controversial use of counter-terror technology that required parliamentary approval and oversight. In addition, Israel’s defense industry, which is made up of three major companies and more than 120 smaller companies, mobilized in other sectors.

For instance, Rafael focused on protecting medical staff from infection through technological solutions and developing other methods that harnessed the company’s ability to map quick solutions to a variety of problems. Rafael, best known for Iron Dome missile defense and the Trophy active defense for tanks, helped work on a robot for nursing activities to minimize contact with coronavirus patients. It also helped with data transfer and thermal imaging via a subsidiary named Opgal.

Group 42 has been utilizing its expertise at artificial intelligence and cloud computing to partner with other international firms, such as Oxford Nanopore Technologies. The UAE has some of the highest testing for coronavirus per capita in the world and is a leader in the Middle East in confronting the pandemic. As such it is a good partner for Israel’s hi-tech sector. That hi-tech sector in Israel is also often closely linked to some defense companies. As such the IAI, Rafael and Group 42 deal fit well with how Israel has sought to confront the pandemic.

The cooperation agreement was signed with IAI’s Elta subsidiary, which makes radars and other technology. Elta is known for making the ELM-2084 radar for Iron Dome, for instance. The agreement foresees using Israel’s aerospace industry, which has “begun to explore various options of assistance needed at the national level in Israel and to offer breakthrough technological solutions,” according to an IAI statement. That statement went on to say that “Since the coronavirus eruption in Israel, the aerospace industry has been collaborating with health and security agencies as well as a member of the Government Authority’s initiative to understand the evolving needs of the fight.” IAI Vice-President and Elta CEO Yoav Tourgeman said: “IAI is pleased to sign this cooperation agreement with our partners in Abu Dhabi. Coronavirus disease crosses continents, peoples and religions and we see paramount importance in the cooperation that will deliver breakthrough solutions. The Israeli Air Force recently joined the fight against the Coronavirus on the basis of the technological know-how, capabilities and daring in the aerospace industry since its inception.”

The UAE’s Emirates News Agency noted that this joint initiative will bring together some of the most active players in the regional coronavirus response. This combination of human and technological assets will accelerate the delivery of breakthrough solutions, the UAE report says.

The pandemic has major geopolitical implications, causing widespread travel chaos and economic uncertainty in the West and potentially empowering countries such as China, Russia, Iran and Turkey. This has major ramifications for the Middle East because a more aggressive Turkey and Iran tend to be hostile to Israel and the UAE. The United States is involved in a campaign of “maximum pressure” sanctions on Iran. The Covid-19 crisis has not reduced conflicts in the Middle East but seen new escalation in Libya, Syria, Yemen and Iraq this year. Iran was one of the most affected countries during the pandemic when it came to the region in February. However, now it is trying to move beyond the crisis.

The challenge of Iran, and friendly ties to America, both make Israel and the UAE natural partners when it comes to sharing technology like this. That the announcement was made publicly on both sides illustrates a growing openness. The Trump administration has sought to include the Gulf states in its peace plans for Israel and the Palestinians, hosting an event in Bahrain in 2019 and also inviting the UAE and Bahrain envoys to the announcement of the plan in January. The role of IAI and Rafael, two of Israel’s largest defense companies which are both keys to Israel’s defensive technical edge, in this agreement points to larger ramifications for the region and also for Israel-UAE ties.

Israel is currently in the middle of discussions about annexing part of the West Bank, something the UAE has warned against. This potentially could harm emerging ties with the Gulf and also harm ties with the Kingdom of Jordan. That the deal emerged despite the annexation tensions shows the priority of working on multiple levels, especially during the coronavirus crisis, to link together the unique know-how that the tech-savvy Israelis possess and global networks of trade the Gulf brings to the table.