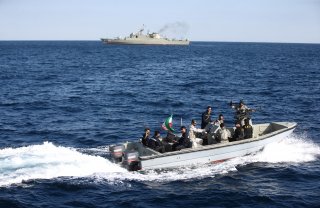 Iranian Islamic Revolutionary Guard Corps fast boats have upped their threats against us naval vessels in the Persian Gulf in recent incidents. The U.S. Navy accused at least eleven of the boats of dangerous maneuvers and Iranian media have slammed the US and released new video of armed drones, naval missiles and other threatening ordnance. This kind of asymmetric warfare, in which one side uses tactics that are different and unequal to the other, but nevertheless threatening, is difficult to confront. Could Israeli technology, which has confronted complex Iranian-backed threats for years, be an answer?

Rafael Advanced Defense Systems, the creator of the Iron Dome missile defense system and the Trophy Active Protection System which is on Abrams tanks, proposes various solutions to threats like those in the Gulf. Rafael notes that asymmetric forces combining vehicles that are airborne, such as drones, or at sea, can paralyze narrow straits like those in the Gulf. Iran has shown that it can use swarming fast boats to harass U.S. ships and has even waylaid U.S. sailors and British Royal Marines in the past. Iran also used twenty-five drones and cruise missiles to attack Saudi Arabia’s Abqaiq oil facility in September 2019, illustrating the threat of swarms of drones.

Currently one of the problems with detecting complex threats, such as small drones and fast boats, is limited due to the detection systems that exist. Iran unveiled new armed drones on April 18 and new anti-warship missiles on April 21. Small, low signature, fast-moving threats that maneuver quickly are complex to detect, Rafael’s unclassified briefing on confronting these threats asserts. Ship-based defense systems have limitations because of the close ranges involved and potential of multiple threats in a congested area such as the Straits of Hormuz.

In response Rafael launched multi-layered Asymmetric Defense Solutions (ADS) which it says offers a diverse mix of naval defense solutions “capable of detecting, locating, track[ing] and neutralizing multiple asymmetric threats from a variety of ranges.” This can aid in defending against attempts by Iran or others to wreak havoc. For instance Iranian allies in Yemen have used drones against Saudi Arabia and attacked ships in the Red Sea. Similarly Hezbollah has been equipped with Iranian drones, missiles and precision guided munitions. Iran has fired missiles at US forces in Iraq and deployed proxies to harass US forces there. The Iranian navy threat builds on this experience.

The multi-layered defense envisioned by Rafael involves capitalizing on technologies that have proved successful such as the long-range guided SPIKE missiles, Drone Dome anti-drone technology and the loitering attack drone munitions known as FireFly. In addition a directed energy high energy laser weapon using microwave capabilities for destroying or confounding enemy munitions, radar systems and cellular antennas can be employed. Israel has been developing lasers for years to take down drones and rockets and has created other uses for these kinds of weapons. Rafael’s Drone Dome has intercepted multiple drones with lasers.

For ship defense Israel also makes the Typhoon family of remotely operated machine guns with Toplite electro-optics that have been used in numerous countries such as Australia. The Toplite device, which looks like a pod on top of the gun, is used for intelligence gathering, surveillance, detection and tracking and targeting of threats.

The concept behind using Israel’s multi-layered approach is that the kinds of threats that hi-tech western powers now face are different than in the past. Enemy states and non-state actors have increased access to weapons like drones or anti-tank guided missiles. The ability of small boats to wreak havoc was illustrated almost twenty years ago during the USS Cole bombing in Yemen. Countries such as Iran don’t have large ground forces or powerful navies that seek to confront the US or allies one-on-one, they prefer to wait for a place of their choosing and then use weapons like drones and missiles that they have invested in and perfected.

Israel invested in defense technology that prioritizes detection of threats, tracking and then targeting them. For instance an Iranian drone penetrated Israeli air space in February 2018 and was downed by an Apache helicopter. Israel has used Iron Dome, Patriots, Arrow and David Sling missile defense against other aerial threats. Iran’s fast boats have not yet attacked U.S. ships and Iran has shown that it has been cautious so far about directly challenging the United States. However, it has unleashed its proxies to kill several members of the U.S.-led coalition in Iraq, and Iran's ally in Damascus has harassed U.S. forces near Tanf, a base in Syria near the Jordanian border. The rising tensions in the Gulf since last year, including Iranian mining of ships in May and June 2019, show that Iran knows how to use threats effectively and with increasing innovation.

Israel is currently confronting those threats in Syria and along the border with Lebanon. Israel has used its advanced fifth-generation F-35s and recently trained the United States to confront threats in the Middle East. Israel has also established a new headquarters to focus on the Iranian threat as part of new multi-year organizational updates of its defense forces. It relies heavily on the advanced technology created by its three largest defense companies, Rafael, Elbit Systems and Israel Aerospace Industries to provide solutions to the new threats.