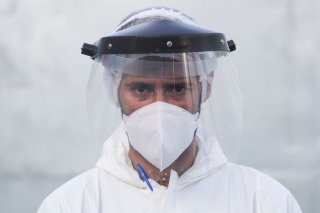 The novel coronavirus has been deemed as deadly as the 1918 flu pandemic, according to a study published Thursday in the medical journal JAMA Network Open.

In arriving at their conclusions, the researchers focused specifically on excess deaths during the first two months of the coronavirus outbreak in New York City and the peak of the 1918 pandemic in the city.

“This cohort study found that the absolute increase in deaths over baseline observed during the peak of 1918 H1N1 influenza pandemic was higher than, but comparable, to that observed during the first two months of the COVID-19 outbreak in New York City,” said the study, which analyzed public data from the U.S. Centers for Disease Control and Prevention, the New York City Department of Health and Mental Hygiene and the U.S. Census Bureau.

The overall mortality rate in New York City in 1918 was indeed higher, the researchers noted, but that was in part due to “improvements in hygiene and modern achievements in medicine, public health and safety.”

Given these facts, the increase in deaths during the early coronavirus outbreak was “substantially greater” than during the peak of the flu pandemic, the researchers wrote.

“For anyone who doesn’t understand the magnitude of what we’re living through, this pandemic is comparable in its effect on mortality to what everyone agrees is the previous worst pandemic,” Jeremy S. Faust, an emergency physician at Brigham and Women’s Hospital in Boston who led the team of researchers, told The Washington Post.

All told, the 1918 pandemic witnessed roughly fifty million influenza-related deaths worldwide, with 675,000 fatalities coming in the United States, according to the CDC.

The latest data compiled by Johns Hopkins University shows at least 743,000 deaths from COVID-19 worldwide, including more than 164,000 in the United States.

“What we want people to know is that this has 1918 potential,” Faust told CNBC. “This is not something to just shrug off like the flu.”

The new study comes as the contagion continues to spread quickly across the United States and other regions of the world.

The CDC recently released an ensemble forecast that projects about 181,000 U.S. deaths by August 29.

And according to new forecast from the Institute for Health Metrics and Evaluation at the University of Washington’s School of Medicine, nearly 300,000 Americans could be dead from the coronavirus by December 1.

The data, however, predicts that consistent mask-wearing by 95% of the U.S. population has the potential to save 70,000 lives.