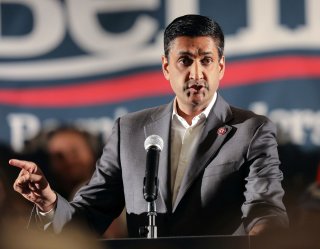 South Korea’s President Moon Jae-in was planning to meet with a Democratic and Republican representative to discuss Korean peace negotiations, but the coronavirus pandemic prevented the meeting, it was recently revealed.

President Donald Trump has attempted to achieve a diplomatic breakthrough in Korea for years, even meeting with North Korean leader Kim Jong-un in the demilitarized zone between the two Korean states. But diplomatic efforts have stalled in recent months.

Rep. Ro Khanna (D-California) was planning a trip to South Korea alongside Rep. Andy Biggs (R-Arizona) to revitalize the diplomatic efforts, he claimed on Monday.

“I supported the President’s efforts in reaching a diplomatic solution,” Khanna said at a video roundtable jointly hosted by Women Cross DMZ, the Quincy Institute, and the American Conservative. “In fact, I was going to go to South Korea before COVID [coronavirus disease] with Andy Briggs to meet with President Moon and see how we could move forward.”

Khanna added that he still plans to meet with Moon “after COVID.”

The Quincy Institute’s Jessica Lee noted in an article published the day after that Biggs and Khanna’s visit “could include a meeting with lawmakers in the National Assembly,” South Korea’s parliament.

The war on the Korean peninsula is technically still ongoing, as neither side signed a full peace treaty after reaching an armistice in 1953.

Khanna claimed that a U.S.-led initiative would help push both sides towards a permanent peace settlement.

“I believe, having spoken to senior advisors to President Moon, that such an initiative by the United States would go a long way to facilitating the peace process,” he said. “If the United States moves first, if we have a peace declaration, that will incentivize, I think Kim Jong-un to take actual steps towards denuclearization.”

“We have to recognize that there isn’t a military solution,” Khanna added.

The California congressman blamed the failure of previous peace initiatives on former National Security Advisor John Bolton, who was fired from the White House in September 2019.

Negotiations over North Korea’s nuclear arsenal broke down in April 2018 after Bolton stated that the United States was seeking the “Libyan model” for North Korean disarmament.

Libya gave up its entire nuclear weapons program in 2003. However, eight years later Libya fell into civil war and its leader Muammar Qaddafi was tortured to death by revolutionaries.

“I tried explaining that the ‘model’ for nonproliferation analysts was completely removing Libya’s nuclear program, not Qaddafi’s subsequent unpredictable demise,” Bolton later claimed in his June 2020 book, The Room Where It Happened. “History showed I didn’t get through.”

But the former national security advisor did not hide his disdain for the peace talks, calling the negotiations “fruitless” and Moon a “schizophrenic.” Moreover, Bolton openly wrote about derailing engagement with Iran and Syria.

Khanna had a more positive appraisal of Moon’s diplomatic skills. He claimed that former U.S. President Barack Obama had “never had a partner” for peace in South Korea.