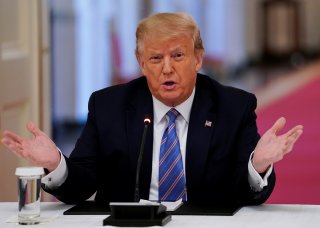 If you told me last week that President Donald Trump and North Korean leader Kim Jong-un would meet again before the year is over, I would have told you to stop embarrassing yourself.

How on earth would these two men, as cordial as their personal relations may be, erase the bad blood that has arisen between their respective nations since February 2019, when the summit in Hanoi collapsed like a house of cards? Why would Kim even entertain the idea given that the U.S. presidential election is fast approaching and that any deal he did sign with Trump could very well evaporate the moment he leaves the White House?

Now, I’m not so confident or brash about dismissing the idea.

The environment didn’t look especially promising for the top-level diplomacy Trump is so fond of using. Since mid-June, the Kim dynasty has been downright prickly. Phone lines with South Korea have been cut. The inter-Korean liaison office designed to serve as a de-facto embassy for the two rivals was blown to bits with sticks of dynamite. A super-duper anti-South leaflet campaign was ready to go. And Pyongyang was making preparations to send North Korean troops to the Kaesong and Kumgang areas. North Korean officials were also lashing out at the United States as of late; on July 6, the Director-General of the North’s Department of U.S. Affairs released a statement that, for all intents and purposes, told Washington to drop dead. “[We] have no intention to sit face to face with the U.S.,” the statement read.

But just as soon as the inter-Korean office went boom, Pyongyang took a step back. Kim Jong-un decided to press the brakes on further escalation with Seoul—for what reason, he didn’t say. Some of the propaganda loudspeakers that were assembled along the Demilitarized Zone were taken apart a day later and shipped back to where their original location. South Korean President Moon Jae-in lobbied for another Trump-Kim meeting before the election, a call that in hindsight appears to be far more substantive than originally thought. Then there was Trump, who loves keeping people on their toes and loves the limelight even more.

Asked by Gray Television’s Greta Van Susteren whether another meeting with Kim was possible this year, Trump didn’t rule it out. In fact, he seemed to embrace the prospect: "I understand they [the North Koreans] want to meet and we would certainly do that.” How he came to the conclusion when the regime is saying the exact opposite, we don’t know. But based on these remarks, Trump is at least open to a reunion with his pen-pal.

None of this, of course, should be a surprise. For better or worse, Trump is not a big fan of the usual diplomatic tactics, where U.S. negotiators unveil a series of preconditions the other side must fulfill before they are granted an audience with the president of the United States. Trump will sit down with just about anybody if it’s good for him politically. Apparently, Trump has made the calculation that shaking hands with the head of the North Korea dynasty would give him the juice he needs to distract the country endless headlines about the coronavirus pandemic (according to the New York Times tracker, cases are up 72% over the past 2 weeks).

It’s clear Trump would get something out of the exchange—publicity and the aura of being a daring statesman who takes risks for the sake of history. But what exactly would Kim Jong-un get? He’s looking for significant sanctions relief on his timeline, with means immediately. Unless the Trump administration is open to throwing their current negotiating strategy in the trash, a quick relaxation of sanctions is not on the table (Stephen Biegun did mention the administration being more flexible in its approach, but Washington and Pyongyang have vastly different definitions of what “flexible” means). The North Koreans aren’t going to receive formal recognition from the United States as a nuclear weapons state for the simple reason that a pile of U.N. Security Council Resolutions forbid such recognition from being bestowed (it would also be a political dumpster fire for Trump if he were to go that route). It’s highly unlikely Kim will get diplomatic relations restored, either—and even if he did, a new administration is just as likely to wipe the slate clean.

In other words, Kim needs something substantial if he is going to even consider hopping on a plane to a yet-to-be-determined location and stroll in the garden with Trump again. Is the president willing to engage in actual diplomacy? Or is he just using the specter of another summit to get positive headlines?

On Twitter, I asked North Korea watchers whether a 4th Trump-Kim summit was likely before November. The best answer came from Mintaro Oba, a former State Department official who worked on the Korea portfolio. "I can only really give you what is becoming my standard response about North Korea things, which is "eh, maybe, but whatever.”

In short: who the knows. It could happen, but don’t hold your breath. Unless Washington is willing to learn from its mistakes and do things a lot differently, any future summit with North Korea is likely to conclude the way the three previous meetings did: symbolism as far as the eye can see, but substance nowhere to be found.