You Might Have Forgot: One Year Ago Today, Donald Trump 'Visited' North Korea 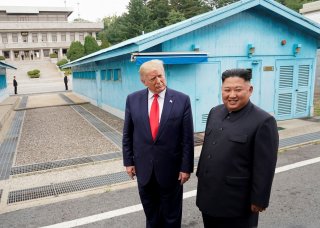 One year ago today, President Donald Trump and North Korean leader Kim Jong-un made history—and entertained the world in the process. Trump, a man who takes showmanship to a whole new level, walked across the Demilitarized Zone and became the first U.S. president to step foot on North Korean soil. It was the kind of act that ded both leaders with the opportunity to masquerade as statesmen.

"This has a lot of significance because it means that we want to bring an end to the unpleasant past and try to create a new future,” Kim told reporters on that day. Trump returned the favor. "Stepping across that line was a great honor. A lot of progress has been made, a lot of friendships have been made, and this has been in particular a great friendship.”

As with everything Trump does on a daily basis, his actions on that late June afternoon divided pundits and Korea analysts. While the usual naysayers blasted the entire episode as a publicity stunt—Sukjoon Yoon, a former captain in the South Korean navy, called the meeting "a shallow exercise in personal promotion by the three leaders [Trump, Kim, and South Korean President Moon Jae-in] for their domestic ends”—others weren’t as dismissive of the symbolism. Devin Stewart of the Carnegie Council wrote that "The photo-op gives both Kim and Trump domestic political cover to stave off calls from hawkish advisers for a more hostile approach toward the relationship.” Eric Gomez of the Cato Institute commented that, assuming Trump and Kim could maintain the momentum, the meeting along the DMZ provided a pretext to keep the U.S.-North Korea relationship from completely falling apart. It was a valid point to make at the time, when the entire diplomatic effort was struggling to keep its head above water after months of inaction.

Unfortunately, Trump’s diplomatic foray with Pyongyang hasn’t moved an inch over the last 12 months. Beyond the occasional letter in the mail, Trump and Kim’s attempt to rekindle diplomacy on June 30, 2019 has disintegrated like an old piece of fruit wasting away on the vine—a product of two parties, the United States and North Korea, uninterested in doing anything other than lecturing about one another’s bad behavior and incapable of contemplating any diplomatic roadmap that doesn’t lead to total capitulation.

The bottom line: the last year has been nothing short of an opportunity lost for both sides.

The Kim regime has been its usual pugnacious self, citing Washington’s “hostile policy” for the dozens of missile tests it has conducted since May 2019 and as the prime reason why Pyongyang can’t afford to denuclearize. When North Korean negotiators sat down with Deputy Secretary of State Stephen Biegun and his team in October 2019, they excoriated the U.S. for pitching lame ideas which demonstrated Washington’s lack of sincerity. The State Department of course strongly disagreed with that characterization, but the damage was already done. Either North Korean diplomats seated around the table on that day weren’t authorized to discuss nuclear weapons, or they weren’t interested in the first place (perhaps both).

The Trump administration has spent the last 12 months regurgitating its top-line position—the United States is interested in peace on the Korean Peninsula and a new relationship with Pyongyang, but only if Kim dismantles a nuclear deterrent his family dynasty has spent countless dollars over decades building. The administration’s outreach (if you could call it that) is a recitation of the same theme, despite zero evidence Kim Jong-un is even slightly more open to eliminating his nuclear arsenal today as he was when he first inherited power from his father nearly a decade ago. Sure, the Trump administration continues to say it’s open to diplomacy with the North—Biegun made this point during a webinar on June 29. But in Pyongyang, these entreaties tend to go in one ear and out the other. Without a fundamental shift in the U.S. position, Kim or his people don’t have much of a reason to give Trump another televised summit. What's the point of going through the hassle of organizing the logistics of a meeting if the meeting itself will be one more glorified talk-a-thon, where the same, old stances get rehearsed?

Where does this leave us for the rest of the year? Unfortunately, the picture isn’t encouraging. There is always a risk in predicting what North Korea will do—who, after all, would have successfully predicted the destruction of the inter-Korean liaison office, the severing of North-South communication links, blusters from Kim Yo-jong about further military actions against Seoul and the sudden suspension of those actions...all in a few weeks time?

But at this moment (barring some unforeseen event), it sure looks like the remainder of the year will look like the last 12 months—offers of dialogue squandered; the prototypical State Department press release requesting Pyongyang fulfill its obligations under the 2018 Singapore statement; KCNA dispatches waxing about how Washington isn’t to be trusted; and a few more missile tests along the way.

In a phrase: expect more of the same.