Hope Is No Strategy for Moon Jae-in on North Korea 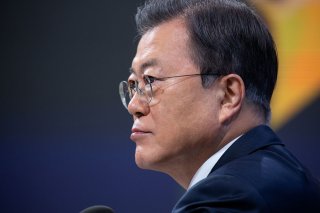 There is nothing South Korean president Moon Jae-in wants in this world more than a comprehensive reconciliation with his fellow Koreans north of the 38th Parallel. When he hasn’t been dealing with fractious politics in Seoul or acrimonious cost-sharing talks with Washington, Moon has spent a good chunk of his tenure trying to inject some stability and regularity into the broader inter-Korean relationship. Whether you agree or not with his policy, no one can dispute the fact that Moon has worked his tail off in the hope of making history on the Korean Peninsula.

But there comes a time when even the most warm-hearted and sincere advocates for peace begin to sound out-of-touch. Moon may be at that point. After all, his first press conference of 2021 was full of misplaced hope that North Korean leader Kim Jong-un is still willing to eliminate his nuclear deterrent.

Judging by the last several weeks, it’s difficult to see how Moon could come up with this conclusion. Indeed, this is the same Kim Jong-un who just ended a Workers’ Party Congress last week bragging about the great technological leaps the North Korean nuclear and missile programs have made over the previous five years. This is the same Kim who referred to the development of the North’s nuclear force as “a strategic and predominant goal” and the “exploit of greatest significance in the history of the Korean nation.” It was only last week when Kim committed the Workers’ Party to strengthening and diversifying the North’s nuclear warheads and missile platforms, adding hypersonic, stealth, and long-range precision missile systems that can strike a target fifteen thousand kilometers away into its arsenal. Granted, some of these weapons systems are merely aspirational—but at a time when former U.S. intelligence officials are projecting more missile launches from the North, Kim’s declarations at least indicate where the regime intends to go.

The Moon administration may be basing its contention that renewed negotiations are just around the corner on a small section of Kim’s address to the Workers’ Party Congress, in which Kim didn’t completely slam the door on dialogue with Seoul or Washington. But Kim keeping diplomacy alive isn’t a breakthrough as much as it is a necessity given Pyongyang’s current situation. Surely, Kim Jong-un recognizes that tossing the diplomatic option in the garbage is akin to tying one hand behind your back. Amidst the bravado about top-notch weapons and large, eleven-axis intercontinental ballistic missiles, estimates for the North Korean economy this year aren’t any better than last year’s horror. As long as North Korea’s formal trade volume with China is a fraction of what it once was, the Kim regime will continue to preserve diplomacy as an option.

Yet it boggles the mind how Moon can take this relatively anodyne observation and draw a straight-line the plausibility of North Korea willing to talk denuclearization in the immediate future. If denuclearization is still a faint possibility, it won’t occur on Washington or Seoul’s timetable.

Granted, there may be something going on behind the scenes that those of us on the outside don’t know. It’s not a stretch to imagine North and South Korean officials getting back to business and re-operating the joint committees the two Koreas agreed to establish when the atmosphere for dialogue was bright. Moon is clearly hoping that a new U.S. administration will be more amenable to South Korea’s viewpoint. We shouldn’t dismiss this hope out of hand, although Joe Biden’s hawkish record on the North Korea issue should dampen some of the enthusiasm.

Even fans of Moon have to acknowledge the obvious: in the twilight of his presidency, Moon’s North Korea policy is running on hope—and fumes.

Daniel R. DePetris is a columnist for Newsweek and a contributor to the National Interest.