It Could Happen: A Military Coup Against Yoon Suk-yeol Is Possible 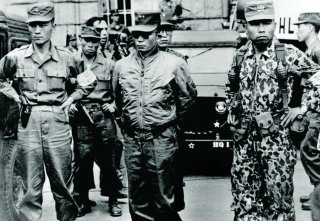 My recent article entitled “Can Biden save South Korea’s Unpopular President from Himself?” has stirred up debate about whether a military rebellion is possible in South Korea. Some contend that since the civilian control of the military took root in the 1987 democratic constitution, a coup has become a distant memory in the country.

However, the shadows of a military coup still linger over the civilian leadership because the feasibility of a coup increases if the military views the incumbent government as illegitimate and perceives themselves to be unfairly treated in an economic sense. Moreover, South Korean president Yoon Suk-yeol will be at the risk of facing a military insurrection if his historically unpopular presidency is not properly dealt with and if he neglects to improve the welfare of soldiers who have answered the call to serve out of a sense of patriotism.

First, when the military sees their head of state as illegitimate, it is not uncommon that they question their abilities as the commander-in-chief. In the United States, Senator Jesse Helms once mentioned that Bill Clinton, who dodged the Vietnam draft, is extremely unpopular among armed forces personnel stationed at the six military bases in North Carolina. Many Korean soldiers are not easy with Yoon since he evaded military duty. Further, many soldiers are aware that no other commander-in-chief was as unpopular as Yoon in the first three months of rule.

How unpopular is Yoon? Morning Consult, a U.S.-based online survey firm, revealed on August 11 that only 19 percent of Koreans rated Yoon positively while 72 percent held a negative view. This signals regime illegitimacy especially given the fact that Yoon was elected president only three months ago. Many Koreans faulted Yoon for his abuse of appointment power and incompetent leadership and many others were shocked when Yoon said on June 15 that he does not know how to handle his wife’s politically controversial behavior “because it is the first time he serves as the president of the country.”

Second, once Yoon decided to move his Executive Office into the Korean Pentagon, the military had to empty their entire headquarters in twenty days. Yoon did not consult any military strategist regarding the move and its negative ramifications on national security; his superstitious belief was the only reason. In addition to the befuddlement from losing their command post, many soldiers were largely distressed that Yoon’s unilateral decision was based on superstition.

Third, as bipartisan cooperation concerning critical issues of war and peace is the norm in the United States, it should be the same in South Korea when it comes to national defense. The Korean military community understands that regardless of their political orientation, all soldiers must form a united front against the enemy in the North. However, the principle of bipartisan cooperation was shattered as soon as Yoon was sworn into office.

To replace all high-ranking, seasoned officers who were appointed by his predecessor with younger, less experienced ones who are loyal to him, Yoon put a three-star, instead four-star, general in charge of the Department of Defense. It is worrisome that the new arrivals are almost all Korean West Point graduates. Each year, Korean West Point graduates consist of less than 10 percent of all commissioned officers, but they predominantly occupy the rank of general. This does not happen in the U.S. Army, as the rank of general is diversified among non-West Point graduates.

Still, frustration and anger alone do not necessarily incentivize soldiers to rebel against an incumbent regime. If disgruntled soldiers believe that they are still beneficiaries of economic growth, they are likely to put up with promotion discrimination. However, if they feel that they are blocked from having access to economic benefits, they are less likely to tolerate an incumbent regime that they perceive to be illegitimate.

Right after Yoon moved into his new Executive Office in the former Korean Pentagon, he cut the military budget by $12 billion. Many soldiers will not receive new uniforms, combat boots, and bulletproof helmets, lowering the safety of servicemen and women. The budget cut also means that the available funds for renovating kitchens and quarters for soldiers will be reduced, deteriorating the quality of military life. Once completed, the renovation projects would be a great improvement to the places soldiers could call home while on duty.

The commander-in-chief spent more than $40 million to renovate his new Executive Office and residence. This amount would be unnecessary if Yoon continued to use the old Korean White House which was in perfect condition. Soldiers saw Yoon prioritize the improvement of his own quality of life and safety while implementing these cuts in the military budget. This has caused many soldiers to feel economically discriminated against.

Furthermore, when Yoon ran his presidential campaigns, he promised that soldier salaries will be more than doubled as soon as he assumes office. Many soldiers voted for Yoon with the expectation of an immediate, steep raise. But President Yoon reneged on that campaign pledge, provoking many soldiers’ economic grievances against Yoon.

I believe that there is a chance of a military coup not only because South Korea suffers from a historically unpopular presidency with the lowest approval rating in history, but also because it experiences an unprecedented volume of economic grievances among soldiers due to the dwindling military budget. Although these two politico-economic conditions do not mean that Yoon is destined to encounter a military insurrection during his tenure, it suggests that the probability of military insubordination is higher under Yoon than it was under any of his predecessors.

For instance, Park Chung-hee, then a two-star general, was the leader who carried out the first military coup in Korean history. On May 16, 1961, Park rebelled against the civilian government led by Chang Myon and ruled the country until he was assassinated by his close associate on October 26, 1979. Park believed that Chang’s rule was illegitimate since mass protests and civil unrest were rampant. Park frequently complained that the soldiers who successfully defended the country from North communists were suffering from economic hardships, while many corrupt politicians enjoy a luxurious lifestyle.

Proud of being one of the first cadets to graduate from the four-year, not two-year, Korean West Point, Chun Doo-hwan usurped power from Choi Kyu-hah who succeeded Park Chung-hee. As Park’s prime minister, Choi was elected to the office of the president by the Korean electoral college, a rubber stamp composed of pro-Park people. Chun viewed the civilian president to be an illegitimate heir of Park’s military dictatorship since Choi was just a figurehead for the military regime. When Chun orchestrated a coup against Choi, he was a two-star general in charge of the Defense Security Command (DSC). The DSC failed to function as the primary military organization safeguarding internal security, preserving loyalty to the regime, and deterring and investigating subversion. Chun was also convinced that Choi could not protect the economic interests of the military since he does not have military blood in his veins.

Roh Tae-woo, the successor to Chun Doo-hwan, installed another military-backed government. Roh was Chun’s accomplice with whom he successfully initiated the 1979 coup d’état against the civilian government led by Choi Kyu-hah. Starting from Roh, the 1987 revised constitution limited the presidential tenure to one term of five years to protect the country in the future from dictatorship.

Pro-democracy advocate Kim Young-sam took after Roh. As soon as Kim assumed office, he dismantled the Korean West Point’s notorious secret society that was the main force behind the 1979 military mutiny; Kim was enthusiastically cheered by the public. Since the military lost power overnight and was unable to remobilize, they could not dream of a revolt during Kim’s tenure.

Kim Dae-jung succeeded Kim Young-sam. The two Kims were famous for their never-ending struggle for Korean democracy. Although Kim Dae-jung came to power in the middle of the Asian financial crisis, he rescued the country from it. Kim earned the 2000 Nobel Peace Prize for paving the way for a peaceful reconciliation between South and North Korea. He also enjoyed widespread popularity until his two sons were, in the last year of his term, arrested on corruption charges. Since the military appreciated Kim’s dedication to the country and attention to military welfare, they had little incentive to go against Kim. In particular, military expenditures expressed as a percentage of general government spending—a proxy for the military’s economic grievances—were high under Kim, especially compared to the first year of Yoon’s presidency.

Roh Moo-hyun, the successor to Kim Dae-jung, was known for his least authoritarian leadership that was rooted in democratic principles and values. All previous Korean presidents except for Roh Moo-hyun established a dictatorship or imperial presidency in which their presidential power exceeded constitutional limits. Due to a series of politico-economic scandals, the five-year average of Roh’s approval ratings is below 30 percent. The military was uneasy with Roh’s statecraft, but they did not attempt to overthrow the democratic government. A critical reason was that the military appreciated their economic dividends. The five-year military expenditure as a percentage of government spending well exceeded the first-year military expenditure under Yoon as well.