Underwater: Over 60 Percent of South Koreans Disapprove of President Yoon 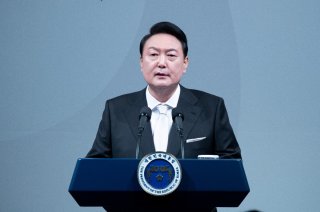 In a world of oil and food shortages, a topsy turvy economy, and changing global power dynamics, the leaders of Western countries are seeing their approval ratings sink to rock bottom as inflation rates rise into the clouds.

South Korea is no different. Less than three months into his presidency, South Korean president Yoon Suk-yeol’s approval rating is at lows most Korean presidents do not hit until late in their terms. According to Gallup Korea, 32 percent of adults approve of Yoon’s performance while 60 percent disapprove. In Kkot Research’s survey, the numbers are even worse: 26 percent approval to 64 percent disapproval. The Korea Society Opinion Institute (KSOI) has him at 34.5 percent approval.

Yoon’s positions on individual issues are also unpopular. 67 percent think it was inappropriate for Yoon to have brought his wife and the civilian wife of his personal secretary along with his retinue to the NATO security summit. 52 percent disagree with his decision to reopen an investigation into the previous administration’s handling of a North Korean defector case. His decisions to appoint multiple cabinet members without Assembly hearings and investigate former President Moon Jae-in’s national security officials have been controversial. Moreover, 66 percent say Yoon’s economic policies aren’t working.

According to KSOI’s early July survey, women’s rights and the economy are the two biggest problems cited by Yoon’s critics. Yoon had been critical of feminists and women’s rights issues during the campaign as he appealed to the grievances of young men associated with Korea’s “alt-right.” He has blamed South Korean women, who experience one of the largest wage disparities of any Organization for Economic Co-operation and Development country, for Korea’s declining birth rates and has claimed societal gender discrimination doesn’t exist. He is currently pushing to abolish the Ministry of Gender Equality and Family, fulfilling one of his campaign pledges.

The economy has its own problems, which Yoon did not cause and cannot fix—certainly not in a short period of time. Inflation is at a twenty-four-year high. The value of the won relative to the dollar keeps falling. The unemployment rate has increased since April.

Yoon deserves his fair share of blame for his woes on social issues and his mismanagement of his own cabinet nominations. But his woes on the economy are beyond his control. Inflation is afflicting every country in the world due to factors outside of any leader’s control.

Unfair? Maybe. But that’s just the reality of politics in the 2020s. Approval ratings for leaders around the world, particularly in Western countries in the U.S. sphere of influence, are mostly underwater.

The war in Ukraine has caused inflation in most of the developed world to double. Crude oil is hovering at $100 a barrel. Food shortages are ravaging the world, causing governments to be overthrown. The problems of the moment are dire, and the public has little patience.

The psyche of the era has created its own problems for any leader trying to manage their country and administration. It is a skeptical era, a cynical era, a time when trust in institutions around the world is free-falling.

Korea is hit especially hard. A 2021 survey found Korea to be the “culture war capital of the world.” The share of Koreans who say there are tensions between the Left and Right—87 percent—is a tad higher than the 85 percent of Americans who say that about the United States. Nine in ten Koreans think there are major tensions between the rich and poor, and eight in ten say there are serious inter-gender tensions.

The 2022 Korean presidential election resembled the American elections of 2016 and 2020. Two highly unpopular candidates were on the ballot facing an electorate that is increasingly polarized. Yoon eked out a 0.7-point victory by fanning the flames of culture wars. No matter who won, they would have faced stiff opposition and had a short honeymoon.

This is the political reality we should expect from Korea, the United States, and much of the world for years to come.