My Quarantine Experience on Yeongjong Island in South Korea 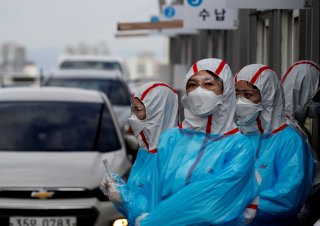 A stern robotic voice came over the in-room speakers of the Royal Emporium Hotel, in Incheon, Republic of Korea, at about 7 a.m. on July 10 in five different languages. It almost sounded like a female version of Hal 9000: “If you are in the hall now, you should enter the room immediately. As I have repeatedly told you, you cannot leave the room during isolation.”

I just arrived in Korea the night before and, after having been run through a gauntlet of extra immigration checks, filling out piles of what seemed to me to be redundant and Kafkaesque forms, and then being herded through the airport onto a bus with other travelers from half a dozen countries, I was inside my home for the next fourteen days.

At the height of the coronavirus pandemic this spring, most countries shut their borders. Now, with over twelve million confirmed cases in the world, China and Japan are still closed to almost all foreign travelers in the world. When the European Union began allowing travel again, Americans were among those still banned from entry. South Korea is one of the only countries that never enacted such wide-ranging bans.

Instead, new arrivals must quarantine for fourteen days with their cell phones tracking their symptoms and their whereabouts. This isn’t some unenforced “self-isolation” like New York Gov. Andrew Cuomo “suggests” to visitors to his state. The quarantine regime in Korea is strict and closely monitored.

No one is allowed to exit their room at any time to stroll outside, buy something from the convenience store, or even wander the halls, and the cameras are closely monitored (those warning announcements come on three times today when other people entered the hallway). We are only allowed to open our doors briefly four times a day: to pick up three meals throughout the day and leave trash outside every night in double-bagged orange biohazard bags. Even the retractable windows are sealed with a layer of plastic tape.

Full-time residents of Korea with a permanent address and close family members of citizens can stay at their home or that of their spouse or parents. But for people like me, who are not a resident and don’t have a Korean family, we must be taken to designated quarantine hotels, a policy put into force on April 1.

The process begins upon arrival at the airport (most likely the Incheon International Airport if you’re flying from the United States). Before getting to the customs line, travelers have to pass through a new quarantine checkpoint. The checkpoint is divided into lines for long-term, full-time residents with addresses and those, like me, without one.

The quarantine line was short, especially for quarantine in a government facility. But a problem soon emerged when the officer asked where I would be staying. On the form, I had simply written “Quarantine.” (Korea Tourism Organization numbers indicate that month-on-month global entries to Korea were down 90 percent in May.)

I didn’t know what my address was, I said. Isn’t that the point of the government’s quarantine facilities? They are for those who don’t have addresses. The hotels are assigned by the government without the traveler’s input.

I was told to list a friend’s address. After calling a friend over Kakao Chat, I had a proxy address and phone number to use. Later, I reviewed the accounts of other Americans who had quarantined in Korea and found many of them also had to list a local address.

Next, I went towards the customs line but before I could get there, I had to pass through a zigzagging maze of stanchions, with almost no people in line, before I could get to a table where I sat down across from a man wearing ROK Army garb separated from me by a transparent wall. At that point, he checked my phone and found that I had already downloaded the old health-tracking app. (Later, at the hotel, they would tell us to delete that app and download a new version.)

Officials took my fingerprints and picture, which is an ordinary part of entering Korea, but then I was taken into an immigration and customs office room and where they asked me more of the same questions and took my fingerprints and photo taken again. That is where the officer explained to me the cost of quarantine (~1,600,000 won) and the strictness of the regulations—topics I was already familiar with—before putting a red sticker on my passport and allowing me to pass through into baggage claim.

In baggage claim, I was briefly free for unsupervised interactions with the land and culture of Korea—like taking a selfie in front of the display of K-pop group Blackpink saying “Welcome to Korea.” After picking up my bag, I was quickly ushered through the customs declaration checkpoint, where I had to put a lanyard around my neck, and joined a group of two dozen or so foreigners headed for the quarantine facility.

I had no idea where we were going but a fellow traveler had heard it was the Royal Emporium Hotel, a three-star hotel amongst a clump of other hotels on the eastern edge of Yeongjong Island. The Incheon Airport is on the same island. The drive was no more than twenty minutes, and the island is sparsely populated compared to urban Incheon and Seoul. (Just one thousand people per square kilometer in the Jung District, compared to sixteen thousand in Michuhol, the historic city center.) The popular Eurwangni Beach is on the opposite side of the island. In short, this would seem to be a pretty good location if the government wanted to keep the quarantined travelers away from population centers and young partiers away from the temptation to try to escape to a club.

But that hasn’t stopped locals from protesting. When the decision to consider the Royal Emporium Hotel as a quarantine facility was announced in May, some residents opposed it, saying there were schools and apartments in the vicinity.

This morning, another announcement came on the speaker informing us that there were protesters outside and we should put our curtains over our windows and avoid doing anything to antagonize them. There was just one elderly man outside my window holding a sign and a police officer quickly told him to move. There may have been more protesters protesting in front of the hotel; my room is in the back of the hotel, and I sure wasn’t going to go outside to look.

Outside my window, there is a blue tent, the kind you often used by Korean protesters, set up in a field of gravel but there has not been anyone at the tent all day. The sign on the tent reads:

There’s probably nowhere in the Seoul Capital Area that isn’t within walking distance of schools, apartments, and businesses. It is one of the most dense and sprawling metropolises in the world, home to half of South Korea’s entire population. However, the residents of the Royal Emporium and the other quarantine hotels are kept inside all day for fourteen days under the watchful eyes of security cameras, cell phone tracking, and an army of workers. It would not be easy for the virus to escape the quarantine area no matter where it is located.

The Ramada by Wyndham Yongin in Jeongdae, about an hour south of Seoul, has been the site of the most raucous protests. For the past week, protesters have been banging on drums and blasting music from loudspeakers as they do in Gwanghwamun, according to the New York Times. One quarantined guest quoted in the article asked to be moved to another room farther away from the ruckus only to be told that the entire hotel was full.

Business owners and locals of Jeongdae say that domestic tourism traffic to the Everland theme park and its related businesses nearby has decreased since it was reported one of the three hundred foreign travelers at the Ramada tested positive.

There have been 736 new coronavirus cases in Korea in the past two weeks, 38.2 percent of which have been imported cases. In all, there have been 1,791 imported cases recorded, but 72.6 percent of those came from Korean citizens, who are not subject to quarantine at designated hotel facilities. Moreover, the policy of quarantining all arrivals should significantly decrease the possibility that such imported cases are later spread to others.

It cannot be said, however, that Korean protesters are xenophobic. In January, protesters in other cities in the Seoul suburbs threw eggs at officials tasked with evacuating Korean citizens from Wuhan. (The alternatives would have been to either leave their fellow countrymen in Wuhan indefinitely or to let them go free and spread the virus throughout Korea?)

As for me, I will not know for sure whether or not I have coronavirus until I check out—the results of the nasal swab and saliva samples taken in the hotel lobby are announced then. Having a six-inch Q-tip-like thing twisted around up your nose is just as weird as it sounds. It is not painful, really, but it is extremely uncomfortable and leaves a sensation that lasts for a good fifteen minutes after it’s removed.