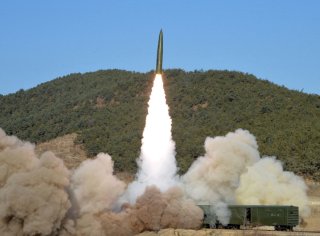 Following North Korea’s launch of twenty-three missiles on Wednesday, the most it had ever launched in a single day, Pyongyang reportedly attempted to launch an intercontinental ballistic missile (ICBM) on Thursday. But the launch failed, CNN reported, citing a South Korean government source.

As a result, the United States and South Korea have agreed to extend the military exercises, known as Vigilant Storm, that they have carried out in recent weeks.

“It was necessary to demonstrate a solid combined defense posture of the bilateral alliance under the current security crisis, heightened by North Korea’s provocations,” the South Korean Air Force said in a statement, as reported by CNN. The South Korean military first noted the launch before it was clear that it had failed.

South Korea’s Joint Chiefs of Staff went on to say that “ballistic missiles are a serious provocation that harms the peace and stability of not only the Korean Peninsula but also the international community.”

CNN reported that the missile was launched from the west coast of North Korea before landing in the Sea of Japan. The missile was said to be a Hwasong-17, which was first unveiled at a military parade in late 2020.

The network cited the state-run Korean Central News Agency, which said that the missile “hit a maximum altitude of 6,248.5 kilometers (3,905 miles) and flew a distance of 1,090 kilometers (681 miles).”

The United States also condemned the launch, as reported by Yonhap News Agency. "The United States condemns the DPRK's intercontinental ballistic missile launch," State Department spokesman Ned Price said in a statement released on Thursday. "This launch is a clear violation of multiple United Nations Security Council resolutions and demonstrates the threat the DPRK's unlawful weapons of mass destruction and ballistic missile programs pose to its neighbors, the region, international peace and security, and the global non-proliferation regime.”

Price had more to say about the failed launch.

“This action underscores the need for all countries to fully implement DPRK related U.N. Security Council resolutions, which are intended to prohibit the DPRK from acquiring the technologies and materials needed to carry out these destabilizing tests … together, with the international community, we call on the DPRK to refrain from further provocations and engage in sustained and substantive dialogue. Our commitments to the defense of the Republic of Korea and Japan remain ironclad.”

There have been fears that North Korea will attempt a nuclear test, its first since 2017, at some point, probably ahead of the midterm elections next week. But no such test has taken place as of yet.