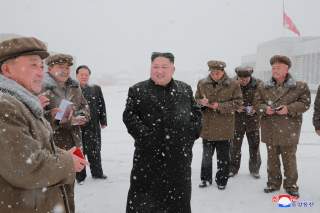 Last June, when President Donald Trump and Kim Jong-un met for a historic yet surreal five-hour summit in Singapore, Americans and the world were left with bold promises and sketchy details. The joint agreement, just one-page long, failed to produce any framework for denuclearization.

It wasn’t all bad. The meeting did reduce tensions in the region. This was much needed as the constant nuclear tests by the North Koreans were causing jitters from South Korea and Japan to Guam and Hawaii. In January of last year, a false ballistic missile alert advised Hawaiians to seek shelter and caused panic across the state.

Now Trump and Kim will be picking up precisely where they left off—there has been no progress since the first summit. A Pentagon report released this month still describes North Korea as an “extraordinary threat” to the United States. The second summit must address the failures of the first.

First, there must be extensive work by the State Department to establish a framework for negotiations. This plan should be written and concluded before the summit so that it can be signed and announced there. This framework must be thorough, including timeframes, definitions, and terms of reference.

Kim has made it clear that President Trump, not Secretary of State Mike Pompeo, is his preferred negotiating partner. President Trump is less concerned with details and substance, and more concerned with optics. This is why it is so critical that Trump arrives with a detailed framework that only requires his huge signature at the bottom. Luckily, the special envoy for North Korea, Stephen Biegun, is aware of what is needed in terms of substance. The danger is that President Trump won’t listen and Kim wins again.

Second, there are tangible goals, other than denuclearization, that can and should be advanced.

Military to military relations could improve with more returns of the remains of U.S. soldiers killed in the Korean War. This improves morale for both militaries. American families get their relatives’ remains home and the North Koreans get funds that they desperately need.

We must also demonstrate to the impoverished North Koreans what economic opportunities they can reap if a deal is reached.

At the end of the day, however, we need to confront the reality that the chances Kim agreeing to destroy his stockpiles are slim. Stopping development, testing, and proliferation, however, could be achieved in exchange for the easing of sanctions. The big question is—does President Trump think this is sufficient?

Bill Richardson, a former governor of New Mexico, served as secretary of the U.S. Department of Energy and ambassador to the United Nations. Richardson has extensive experience negotiating with Pyongyang and has visited North Korea several times. As a diplomat and Special Envoy, he has received five Nobel Peace Prize nominations, and has successfully won the release of hostages and American servicemen in North Korea, Cuba, Iraq, the Sudan Pakistan and Mexico.