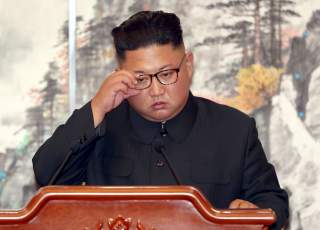 During my exchanges with senior North Korean officials in Pyongyang last year, I came away with three key insights.

First of all, Pyongyang is negotiating from a position of simultaneous strength and insecurity. One need not be Tolstoy to realize that actual human beings are bedeviled by contradictory emotions, which could influence their strategic calculus. On one hand, North Korea repeatedly emphasized that they are now a “full-fledged strategic state,” a euphemism for a nuclear weapons state. They fancy achieving “strategic parity” with superpowers. Meanwhile, it was abundantly clear that the regime is anxiously aware of its economic isolation, which has been frustrating Kim Jong-un’s genuine efforts at economic modernization.

This brings me to my second point, which is Pyongyang’s humiliating reliance on one country, namely China, as its economic lifeline. Throughout my stay in North Korea, not even once did I hear (even during the karaoke nights) an ounce of gratitude towards Beijing, which has kept the regime afloat amidst the world’s most punishing sanctions regime.

Lastly, the off-hand admission by one North Korean official that when it comes to some American leaders “they need to make decisions quickly” in order to achieve their desired goal, while they could have more patiently “waited out” others. It was clear that they were referring to President Donald Trump, an instinctive leader who Isaiah Berlin would have characterized as the “hedgehog,” someone that holds onto “a single, universal, organizing principle in terms of which alone all that they are and say has significance.”

The problem, however, is that Kim is also a “hedgehog” (compared to his “foxy” father) and, thus, there is a great risk of miscalculation. Hedgehogs are great when it comes “creative disruption”—opening direct communication channels between two hostiles states—but the Korean Peninsula conundrum requires fox-like negotiations, since what we are dealing with is nothing short of a jigsaw puzzle: many things have to go right at the same time for an actual breakthrough to take place.

Thus, the second summit will have to be immediately followed up by phased negotiations, lest the whole gambit fall apart. A symbolic peace agreement would mark a great start, followed by reciprocal, step-by-step concessions, which may very well exceed the duration of Trump’s tenure. Don’t expect North Korea to give up its nukes overnight, but don’t rule out Kim’s willingness to go all the way in exchange for economic revival.