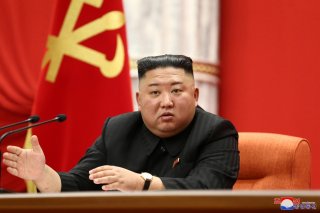 Throughout the year of 2020, 5G rolled out across the United States and much of the world, sometimes to great (if unearned) controversy.

But in North Korea, however, is still stuck on 3G.

The country launched its 3G network in 2008, not long after the United States did (the iPhone 3G came out in 2008 as well.) The network, provided by Koryolink, doesn’t work like mobile networks in the Western world; for one thing, there’s no Internet access, and for another, communications are severely restricted.

Orascom Telecom, the Egyptian firm, made an investment in that 3G network, but subsequently fell out with the regime, Network World reported in 2015, as Orascom reportedly was unable to get its profits out of North Korea. The Washington Post reported in 2019 that the controversial Chinese firm Huawei had played a part in building North Korea’s network.

But now, after more than twelve years, there are indications that North Korea might finally be upgrading—to 4G.

In fact, Kim Jong-un said at the recent 8th Congress of the Workers’ Party of Korea that the country should upgrade its telecommunications.

“The field should step up technical updating of its infrastructure and turn mobile communications into a next-generation one as early as possible by developing the relevant technology,” Kim reportedly said at the Congress.

It’s not clear how far along such efforts are, or when they might come to fruition. And with sanctions in place, it’s unclear how foreign investment in the network would work.

The leader is also said to have called for a TV upgrade, so that “people in all parts of the country, ranging from cities to remote mountain villages, [can] enjoy a better cultural and emotional life.”

According to North Korea Tech, North Korea is nearly always a generation behind much of the world when it comes to its network. It launched 2G in 2002, as 3G was rolling out elsewhere, while the 3G network in North Korea launched when 4G was already well on its way.

It was reported back in November that North Korea was cracking down on Chinese-made phones, as foreign cell phones are illegal in North Korea. That report stated that those “caught in the act talking on the phone with those in a foreign country” would be looking at “five years of correctional labor.” North Korea’s cellular infrastructure has frayed to the point where most people with those Chinese phones only check them about once a month, according to the Daily NK.

This week, Developing Telecoms found that North Korea has, as of late, tightened control over information access.