North Korea Raised Tensions During the 2016 Elections. What About 2020? 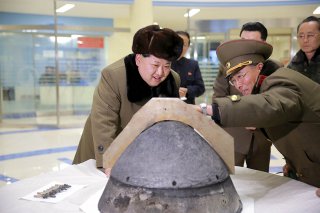 North Korea has a long history of timing its weapons tests for strategic effect, whether to gain a perceived upper hand in ongoing negotiations with Washington or to intimidate its southern counterpart.

Despite its insular nature, Pyongyang was keenly attentive to the prior U.S. presidential election and the events immediately following it. Here is what the record of DPRK’s missile launches in 2016 can tell us about what to expect from North Korea as we draw closer to the 2020 election.

The first half of 2016 was a busy time for North Korea’s missile test programs, which had steadily grown in frequency and scale in the years following the Obama administration’s failed 2012 effort to reset relations with Pyongyang. In January 2016, North Korean state media announced the successful test of a miniaturized hydrogen bomb. Experts had good reason to doubt the validity of DPRK’s claims, but South Korea nonetheless condemned the development as "a grave provocation to our national security.” The hydrogen bomb test prompted international threats of further sanctions, to which Pyongyang responded by defiantly firing a long-range rocket over Japan in the following month.

The United Nations Security Council moved to punish North Korea in March, implementing an expanded round of sanctions as part of Resolution 2270. The UN also attempted to curb North Korea’s illicit arms trade by requiring routine cargo checks for goods in transit to or from North Korea—an effort that, partially by the UN’s own admission, has proven largely futile. North Korea responded with a flurry of intermediate-range and submarine-launched ballistic missile tests over the course of April, including the inauguration test launch of its 2,500–4,000 km range Musudan missile—a milestone in DPRK’s efforts to credibly threaten not only Japan and South Korea, but also US military infrastructure in Guam.

The international community responded with threats of further sanctions, but Pyongyang was uncowed; in a May 2016 party speech, Kim Jong-un famously christened North Korea a “responsible nuclear state” that “will not use a nuclear weapon unless its sovereignty is encroached upon by any aggressive hostile forces with nukes…”

Kim’s speech set off a cascade of nuclear and conventional missile tests that lasted through October. But there was a stark change in the weeks leading up to the 2016 presidential election. Pyongyang projected a somewhat positive attitude about candidate Donald Trump, with DPRK’s state media calling him a “wise politician” and celebrating his willingness to meet with Kim. The avalanche of North Korean missile tests slowed to a trickle in the months following Trump’s November victory; it was only in February 2017 that DPRK’s medium and long-range missile tests resumed, drawing President Trump into a prolonged game of brinksmanship that culminated in the 2018 Singapore summit.

What lessons can we draw from 2016? North Korea’s abrupt suspension of tests in mid-October was premised on Pyongyang’s hope of negotiating with President-elect Trump to secure the acceptance and formal recognition of the DPRK as a legitimate nuclear power. It did not take long for Kim to see that this was not in the cards, and so the tests quickly resumed in 2017. In stark distinction, Pyongyang quite clearly does not believe it can secure a favorable deal from either President Trump or Joe Biden in the 2020 election— indeed, the prospects for any type of constructive dialogue on denuclearization seem bleaker than ever. Thus, there is no reason to expect the kind of lull in weapons testing that we saw during the late stage of the last presidential election cycle. On the contrary, North Korea will likely keep on testing its growing and increasingly sophisticated missile arsenal as a tool of regional pressure while peace talks with the South continue to sputter.