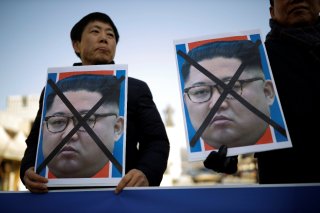 Park Sang-hak, a North Korean-born human rights activist living in Seoul, announced on Thursday that he had resumed his campaign of sending leaflets into North Korea on balloons—a crime under South Korean law, which banned the practice in early 2021 over fears that it would provoke North Korea’s leadership.

Park, who is currently on trial for previous instances of cross-border leafleting, indicated that he had resumed his activities after a year-long hiatus while preparing for his trial. He claimed that his activist group, Fighters for a Free North Korea, had loaded twenty large balloons with leaflets containing messages critical of the government of North Korean leader Kim Jong-un and floated them across the demilitarized zone (DMZ), the heavily militarized border between North and South Korea.

In addition to the leaflets denouncing Kim and North Korea’s nuclear program, the balloons contained depictions of South Korea’s incoming president, Yoon Suk-yeol, and cited his election in March as a contrast to the Kim family’s continuous hold on power since North Korea’s formal establishment in 1948. They also included small books and USB sticks containing information about the outside world, which is heavily restricted in the north.

The police in Gyeonggi, the northwestern South Korean province containing Seoul, claimed that they had not known about Park’s activities in advance and were conducting an investigation.

The ban on North Korean leafleting was passed under the administration of President Moon Jae-in, a liberal who sought closer ties with North Korea during his four-year tenure. Although the leafleting ban has been defended as a necessary step to preserve peace with Pyongyang by some South Koreans, others have argued that it violates the South Korean constitution’s guarantee of freedom of speech.

Park estimates that he has sent more than one million leaflets into North Korea since the start of his campaign.