North Korea's Kim Jong-un In a Coma? History Cries Out to Be Skeptical. 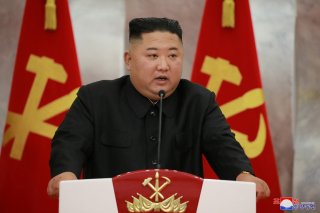 That’s at least what Chang Song-min, the late South Korean President Kim Dae-jung’s political affairs secretary, is saying on social media. Citing a secret contact in China as his source, Chang wrote that Kim is physically and mentally checked-out. “I assess him to be in a coma, but his life has not ended,” he said.

Where is this assessment coming from? And why now?

Apparently, it hinges on news that South Korea’s National Intelligence Service believes Kim Jong-un delegated some of his power and responsibility to his younger sister, Kim Yo-jong, due to his overbearing work-load. You may remember Kim Yo-jong as the feisty woman in her 20’s who took over the South Korea portfolio for a time during the spring and used her newfound perch to lob insults at South Korean President Moon Jae-in and announce with pride that the inter-Korean joint liaison office was scheduled for demolition. You may also remember her as the smiling head of the North Korean delegation at the 2018 Winter Olympics in Seoul, where she shook Moon’s hand, sat next to him during the festivities, and looked like a personable figure compared to the strong-jawed U.S. Vice President Mike Pence. She’s now commonly floated as the heir apparent of the Kim dynasty if her older brother croaks.

Is Kim about to croak? Is he on the brink of losing control?

We’ve asked these questions so many times in the past that we are starting to look like Charlie Brown with the football, ready to score a field goal only to find ourselves on the grass with a sore rear-end. Far too often over the years, scholars, analysts, government officials, and pundits have speculated about Kim’s status to the level where it has become a national pastime. Yet on each occasion, the speculation is upended as Kim reappears and turns out to be his usual self.

There was that time in 2014 when Kim’s weeks-long absence fueled the rumor mill of a potential coup against the young North Korean leader, then only three years on the job. When Kim re-emerged with a cane, a new dose of commentary was unleashed about what kind of operation he may have had. In 2018, there were murmurings that Kim was worried about being removed from power as he made the trip to Singapore for his first summit with President Trump. This is on top of our obsession with Kim’s lifestyle habits, how many packs of cigarettes he goes through every week, how much whiskey he drinks, and whether he has any sexually transmitted diseases.

This year, punditry about Kim entered the theater of the absurd. His three-week absence and no-show for his grandfather’s birthday celebration led to a torrent of TMZ-style accounts. First, Kim was believed to be brain-dead or in serious condition after a botched cardiovascular surgery. Then, his condition was so dire that Chinese doctors flew in to save his life. Then he was dead. Then he wasn’t dead, but gravely injured by a missile test gone bad. The most likely reason for Kim’s public absence—making sure the leader was separated from anyone who may have contracted the coronavirus—was also the least exciting. Once the coverage was over, a few people had egg on their faces; Thae Yong-ho, a former North Korean diplomat-turned-South Korean lawmaker, had to humbly apologize for stirring disinformation.

One would think that all of us would learn our lesson and keep our traps shut about anything having to do with Kim Jong-un’s stamina or the inner workings of the Kim dynasty. But why live in the present when we could build a dramatized fantasy?