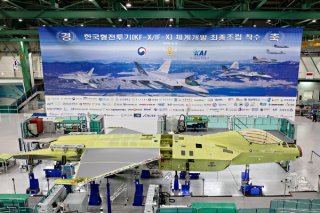 In June, the Republic of Korea (South Korea) announced that it would purchase 40 F-35A Lightning II stealth fighters. That was in addition to the 13 F-35A aircraft that the country received in 2019. That announcement coincided with South Korea's deployment of tanks and troops to the DMZ (demilitarized zone) along its border with North Korea.

Last month, South Korea also announced that as part of its newly published national plan for 2021-2025 the Asian nation would build an aircraft carrier, which could allow it to compete with its main rivals in the region including China and Japan. The South Korean carrier will reportedly feature a flat flight deck but it is unclear if Seoul would acquire the vertical-landing F-35B version of the Lockheed Martin-produced Joint Strike Fighter. Seoul has considered a purchase of the F-35Bs to complement South Korea's land-based F-35As.

A more likely scenario is that the future South Korea carrier will operate with an airwing of domestically-built KF-X (Korean Fighter eXperimental) multirole jets, which are expected to take flight in 2022. The jets are reported to have a top speed of about 1,400 mph or roughly Mach 1.83, and have a range of about 1800 miles. The KF-X could be capable of carrying up to 7,700 kilograms of payload.

This isn't exactly "news" – as the KF-X was announced in 2010 as a joint venture between South Korea and Indonesia, but details were sparse until a full-size mockup was presented at last year's Seoul ADEX 2019 trade event. A promotional video further highlighted some of the advanced capabilities, but one major takeaway is that the aircraft has been branded as a 4.5 generation fighter – so it could be a step backward for South Korea to adopt the jet over the F-35B for its forthcoming carrier.

Korea Aerospace Industries (KAI) has reportedly made serious progress on the first prototype, and images of the aircraft were shared on numerous outlets including TheDrive. KAI has stated that the aircraft will be produced in both single- and tandem-seat variants, and both versions will feature three hardpoints under each wing for weapons and/or external fuel tanks. The aircraft will be capable of carrying four missiles under the fuselage.

While this is expected to be an impressive aircraft – even if it isn't a true fifth-generation fighter – but a sticking point could be the cost. The Eurasian Times reported that some aviation experts expect the costs of the KAI-built KF-X to exceed Lockheed Martin's F-35. The fighter is already the largest homegrown weapon development project in the small nation's history, and according to reports, the government has spent about 8.6 trillion won ($7 billion) on the project.

By the time the production starts to produce the 120 or so of the new jets desired by the Republic of Korea Air Force (ROKAF), which could begin in 2026, Seoul could see the bill increase by an additional 10 trillion won. A report from Forbes.com noted that each KF-X could around $130 million, which is significantly more than the U.S.-built F-35 cost in 2019.

For its part, Lockheed Martin has done a reasonable job at bringing down the cost of the F-35 – notably by attracting foreign customers, and the F-35 remains the only stealth fighter that has expert customers. It isn't clear if Seoul will be able to get the same attention from buyers around the world.

While South Korea needs the 120 fighters to replace its aging fleet of McDonnell Douglas F-4D/E Phantom IIs and Northrop F-5E/F Tiger IIs, the KF-X might be the most expensive option.